Snippets from Eagles' songs. Mostly, I give you the lyric, and you name the song, but there are a few exceptions.

Quiz Answer Key and Fun Facts
1. Name that song: "All the gamblers call her the cheap one."


Answer: Out of Control

"Certain Kind of Fool first appeared on the 1973 album "Desperado".
3. What lyric comes from the song "Outlaw Man"?


Answer: First left my woman, it was down in Santa Fe

"Doolin-Dalton/Desperado Reprise" was first recorded on the 1973 album "Desperado", and includes bits from both songs "Desperado" and "Doolin-Dalton", as well as some unique lyrics.
6. Name that song: "On the day that I die, well I just might scream."

The lyrics used come from the song, "Take the Devil" on the 1972 album "Eagles".
9. What lyric comes from the song "Train Leaves Here This Morning"?


Answer: "1320 North Columbus was the address that I wrote down on my sleeve."

"You Never Cry Like a Lover" was only recorded on one album: 1974's "On the Border".
Source: Author simplyblatty 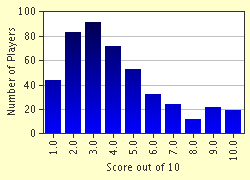 
Other Destinations
Explore Other Quizzes by simplyblatty