Elton John, Did He Really Say That? Quiz

Whether it's brutal honesty or diva-like ramblings, Sir Elton John is notorious for his sharp tongue. This quiz will include some spoken words and some lyrics from the pop superstar's songs. Good luck!

Share on Facebook
Share on Twitter
Share by E-Mail
Author
jaike
Time
5 mins
Type
Multiple Choice
Quiz #
192,754
Updated
Dec 03 21
# Qns
10
Difficulty
Tough
Avg Score
6 / 10
Plays
567
This quiz has 2 formats: you can play it as a or as shown below.
Scroll down to the bottom for the answer key.

Quiz Answer Key and Fun Facts
1. "I'm glad I've given up drugs and alcohol. It would be awful to be like Keith Richards. He's pathetic. It's like a monkey with arthritis, trying to go on stage and look young. I have great respect for the Stones but they would have been better if they had thrown Keith out 15 years ago." Why did Elton verbally bash Keith Ricahrds?

In the late 1990's Keith Richards jokingly attributed the all of Elton's success to "dead blondes" in light of "Candle in the Wind" being re-written and re-released for Princess Diana.
2. Which song contains the line "Well, here's my middle finger!"?


Answer: Made in England

From the 1995 album of the same name, this is Elton's patriotic salute to his homeland. It's not unlike Bruce Springsteen's "Born in the USA". The complete verse is:

"I was made in England
Like a blue Cortina.
But a yankee summer had a way about her.
You had a scent for scandel.
Well, here's my middle finger!
I had forty years of pain and nothing to cling to."
3. In September 2004, Elton yelled "Rude vile pigs!" towards a group of people in a Taiwan airport. Who were they?

One photographer shot back with "Why don't you get out of Taiwan?"
Elton retorted with "We'd love to get out of Taiwan if it's full of people like you. Pig! Pig!"
4. In what song can you hear the statement "I'm better than you. It's the way that I move. The things that I do."?


Answer: The Bitch Is Back

This song was also covered by Tina Turner on the "Two Rooms" tribute album for Elton and lyricist Bernie Taupin in 1991.
5. Which reality TV series did Elton accuse of being "racist" in April, 2004?

Even though Ruben Studdard won the top prize in 2003, Elton tagged the national viewing audience's vote as being "incredibly racist".
6. In this early 1970's hit Elton sang "Won't you please excuse my frankness but it's not my cup of tea." What is the title of the song?

This gospel song was on Elton's self-titled album released in the US in 1970. Bernie Taupin's lyrics were at first criticized as being esoteric; i.e. what was not his cup of tea? The lyrics do not provide any clear definition. The lyrics in early songs like "Border Song" and "Take Me To The Pilot" are more topical rather than concise.
7. "Anyone who lip-synchs in public on stage when you pay 75 pounds to see them should be shot" was uttered in reference to which female pop diva in October, 2004?

Elton was quite upset that Madonna was nominated for Best Live Performance at a Q Magazine awards ceremony. Madonna did not win the award.
8. "But I'm gonna put buckshots in your pants if you step into my yard" can be heard in which of these songs from the 1973 "Goodbye Yellow Brick Road" album?

The song is literally about a "dirty" girl. The complete chorus is as follows.

"I'm gonna tell the world, you're a dirty little girl
Someone grab that bitch by the ears
Rub her down scrub her back
And turn her inside out
`Cause I bet she hasn't had a bath in years"
9. In 2001 Elton shocked the world by defending a popular yet controversial artist by saying his musing were "Really hard-core stuff, but it's intelligent hard-core. It's poetry and also musically interesting." Other groups said the "stuff" was homophobic and misogynistic, including American Vice President Dick Cheney's wife, Lynne. Who was the controversial figure Elton defended?

Elton and Eminem performed a duet at the 2001 Grammy Awards.
10. OK, a tough one for the Eltonites. "Oh you bloody young fools. I could get more sense out of the back end of a mule" can be heard in what 1973 B-side single?

This quiz was reviewed by FunTrivia editor ralzzz before going online.
Any errors found in FunTrivia content are routinely corrected through our feedback system.
Most Recent Scores
Jan 07 2023 : Guest 71: 1/10
Dec 26 2022 : Guest 98: 10/10 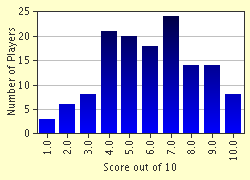 
Other Destinations
Explore Other Quizzes by jaike