Elvis The King Of Rock And Roll Quiz

This is a quiz on one of the most famous singers of all time. He sang everything from rock and roll to gospel. He captivated audiences all over the world, from his soothing ballads to his more upbeat songs such as "Jailhouse Rock".

Quiz Answer Key and Fun Facts
1. In what year was Elvis born?

His name was Jesse Garon Presley. He was stillborn. Elvis was born a half hour after Jesse. Due to the death of his brother, Elvis had a strong relationship with his mother.
3. What was Elvis' mother's name?

Elvis was Gladys' baby. She died of a heart attack when she was only 42 years old. She was buried in Forest Hill Cemetery in Memphis, Tennessee. In 1977, her body was moved to Graceland where it lies beside Elvis.
4. What was Elvis' father's name?

Vernon built the house where Elvis was born, out of wood that cost $180.00.
5. Did Elvis' father ever spend time in jail?

He altered a $4.00 check to read $40.00. His family was in desperate need of money for food. He thought no one would notice what he had done.
6. In what year was "Blue Moon of Kentucky" released?

This song was originally recorded by Bill Monroe in 1947.
7. Elvis was only shown on TV from the waist up.

After his first TV appearance adult viewers were upset by the way he would shake his hips while singing "Hound Dog". They thought it was too sexual.
8. In what year did Elvis enter the Army?

March 24, 1958. The press labeled this day "Black Monday". Many of his fans went to the Greyhound Bus Depot to see him off. He was stationed in West Germany for 18 months.
9. What was Elvis' favorite fried sandwich?

This sandwich is made just like a grilled cheese sandwich.
10. When did Elvis die?

Some people believe he died of a drug overdose, but the medical examiner said the cause of death was cardiac arrhythmia.
Source: Author lteresa 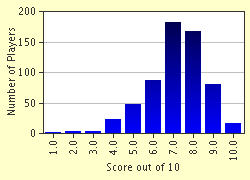 
Other Destinations
Explore Other Quizzes by lteresa