This quiz is for the ultimate Elton John Fan! If you get more than half of these questions right You are a fanatic just like me.

Quiz Answer Key and Fun Facts
1. What was Elton's character's name in the movie version of "Tommy?"

Although the song is "Pinball Wizard", the scoreboard says "The Champ" in bright lights behind Elton's Pinball Machine.
2. Who was in the running for the part of the pinball wizard in "Tommy" before Elton was chosen?

Rod Stewart was offered the job by Ken Russell. While Rod couldn't decide whether or not to appear Elton told him not to sing in the movie so Rod declined the offer. Pete Townshend then asked Elton to take Rod's place.
3. Which album are these songs from? "Social Disease" "Your Sister Can't Twist" and "Dirty Little Girl"?

Elton has appeared on all except for "Queer as Folk."
5. Which album are these songs from "Come Down in Time" "Talking Old Soldiers" and "Amoreena"?

The concert took place at Boardwalk Hall on November 15, 2003.
7. Name the song: "All our innocence gave way to lust as the peacock spread its fan and they taught us how to crack the whip..."


Answer: Dogs in the Kitchen

This was a song originally supposed to be released on "Captain Fantastic" but never made it to the original album.
8. Which albums are these songs from: "Blues for Baby and Me," "Midnight Creeper," and "Texan Love Song"?


Answer: Don't Shoot Me I'm Only the Piano Player

All taken from 1972's "Don't Shoot Me I'm Only the Piano Player".
9. Elton's version of "Lucy in the Sky With Diamonds" appeared on which of his albums?

Although a live version of the song (with John Lennon) is on "Here and There Remastered," "Lucy in the Sky With Diamonds" was not featured on any of Elton's albums.
10. Elton's wife's name was... 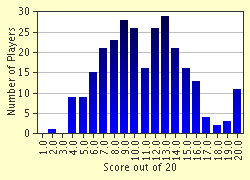 
Other Destinations
Explore Other Quizzes by SalliesMan15