I Hate Myself and Want To Die: A Nirvana Quiz

A few moderately hard to tough questions in here. Thanks and have fun.

Kurt was actually introduced to Krist through Buzz.
2. Where in Seattle was Nirvana's first major show?

Their first gig was actually on April 24, 1988.
3. The "Love Buzz/Big Cheese" single came out before Kurt smashed his first guitar.

Kurt smashed his first guitar the 30th of October, 1988. "Love Buzz/Big Cheese" was released the next month.
4. "Hormoaning" was released in which of these countries?

It was also released in Japan.
5. Kurt Cobain craved what creamy drink after awakening from his coma?

He awoke from his coma on the 5th of March, 1994.
6. In what year were Nirvana eligible for the Rock and Roll Hall of Fame?

A band is eligible for the Hall of Fame 25 years after their first album is released.
7. Which of the following songs is available in "Muzak" (elevator music)?

A graffiti artist tagged everything as "CHAKA" in L.A.
9. Which was the nickname of Michael DeWitt, the nanny who worked for Kurt and Courtney?

Michael DeWitt appeared on the "In Utero" album. He was in drag.
10. What does "In Utero" translate into?

Kurt was fascinated with birth, and how women gave birth- perhaps inspiring this title?
11. "Nevermind" went gold in what month of 1991?

Only a few weeks after its September 24th release, Nirvana's second album, "Nevermind", went gold.
12. Nirvana had a very short tour in the December of 1991 with which band?

They also went with the Red Hot Chili Peppers.
13. Kurt got into a brawl with a bouncer in what U.S. city?

He smashed the monitor board there, and the 400-pound bouncer got angry and started to chase Kurt. He began punching him, and Kurt, trying to defend himself, accidentally knocked the guy in the head with his guitar. The group ran into a taxi, but the taxi driver got stuck in the parking lot for a while.

The bouncer found them and punched in their back windshield before the group was able to escape. The band sent the bouncer three grand, so he wouldn't sue them.
14. Kurt and Courtney's daughter, Frances, was named after whom?

Kurt stated in a later interview that he wished he had thought of naming her after Frances Farmer.
15. Who is the baby on the cover of "Nevermind"?

He made $250 for the picture, according to "Rolling Stone" magazine.
16. Dave was the only band member to graduate from high school.

Krist was the only band member to graduate from high school.
17. The political group Krist founded is called what?

It is an anti-censorship group.
18. Which band member has stated that bootlegs are like "stealing music"?

Dave admits to collecting Nirvana bootlegs.
19. The song "Polly" was also known by what other name?

It was said that "Cracker" was even harsher than "Polly".
20. In which Nirvana album did the band ward off homophobic, racist, or sexist people with a comment that stated that if you hated homosexuals, people of a different color, or women, to stop buying their records and attending their shows?

He ended the liner notes with "Kurdt (the blond one)".
21. Which of the following ideas was Kurt's first idea for the cover of "Nevermind?"

The idea was deemed too graphic, so Kurt settled on the baby and the dollar bill.
22. Kurt was closer to Dave then he was to Krist, despite Kurt knowing Krist for longer.

Dave stated in an interview that Kurt and Krist were best friends, and Krist was one of the only people who could make Kurt laugh.
23. Pat Smear was born with what first name?

He was also born with the last name Ruthenberg.
24. Nirvana's "In Utero" CD was recorded in which U.S. state?

It was recorded in two weeks.
25. What famous musician was mentioned in Kurt Cobain's "suicide" note? 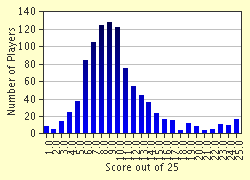 
Other Destinations
Explore Other Quizzes by luckyduckie