Ladies and Gentlemen, Dig The Who Quiz

Long live rock, and long live The Who! Here are ten questions that (most of) their fans should find (kind of) easy.

Quiz Answer Key and Fun Facts
1. A great story, even if not true: When a hotel manager complained of the "noise" coming from Keith Moon's tape player, what did Moon supposedly do?


Answer: Set off a cherry bomb and explained to the manager "THAT was 'noise' - THIS is The 'oo!" then turned the tape player up louder.

The story has generally been dismissed as made up, but it's a good one. The similarly funny story of him driving a car into a Holiday Inn pool on his 21st birthday is also false.
2. As The Who played at Woodstock, activist Abbie Hoffman ran onto the stage. What happened next?


Answer: Pete smashed him with his guitar and kicked him off the stage.

Townshend subsequently admitted regretting doing so.
3. Which line comes next: "There's a million ways to laugh, and every one's a path..."?


Answer: Come on and join together with the band.

From "Join Together", initially released as a single in 1972.
4. The first verse of the song "Who are You" chronicles the aftermath of an evening that Pete spent drinking with which musicians?


Answer: Steve Jones and Paul Cook of the Sex Pistols

Townshend had spent a marathon session negotiating with Allan Klein, a businessman he detested, and went to a bar. There he met Jones and Cook and, intent on pouring out his doubts about himself to them, wound up being shocked that they admired him and his music. A long night of drinking left him to wake up in a Soho doorway, where a policeman knew his name, and the rest is Who-story.
5. What song was sung by another member of the band because Roger refused to sing the lyrics?


Answer: However Much I Booze

"However Much I Booze" from 1975's "The Who By Numbers" was written by Townshend when he was struggling with alcohol. Roger found its self-loathing lyrics ("I'm a faker, a paper clown, it's clear to all my friends that I habitually lie; I just bring them down... But however much I booze, there ain't no way out") too personal, so Pete sang it.
6. What famous event from the 1960s happened the day before the famous photo of the Who sleeping under a large Union Jack flag was taken?

The picture was taken at Grant's Tomb in New York City on April 5, 1968, the morning after Martin Luther King was killed. Keith Moon's antics with cherry bombs had gotten the band kicked out of their hotel the previous night, and they reputedly weren't faking being tired in the picture. It was used for an article in Life magazine, and was later the cover for "The Kids Are Alright".
7. On November 20, 1973, Keith collapsed on stage in San Francisco while the band played "Won't Get Fooled Again". He revived, then collapsed again during the next song. Who played drums for the rest of the show?

Scott Halpin's turn behind the drums in San Francisco is one of the more bizarre episodes in rock history - even one of the more bizarre episodes in Keith Moon history! When it became clear that Moon would NOT be returning for the rest of the show, Townshend asked from the stage "Can anybody play the drums?" Scott Halpin, a 19-year-old from Muscatine, Iowa, made his way from the audience to the stage, took over the drums, shook Townshend's hand, and played on the band's final songs, "Smokestack Lightning/Spoonful" and "Naked Eye".
8. What records did John say he was shooting at in "The Kids Are Alright"?

This is of course from the funny scene in which John uses gold records for skeet shooting practice. After failing to hit anything with a shotgun, he pulls out a machine gun and demolishes the "targets"!
9. With which former Beatle did Keith dine the night before he died?

McCartney hosted a lavish party on September 6, 1978 in conjunction with the British premiere of "The Buddy Holly Story" that evening. Moon and his girlfriend sat with Paul and Linda McCartney during dinner. After leaving the party early and returning home feeling fine, Moon died from an accidental overdose of medicine that had been prescribed for his alcohol abuse. Two interesting footnotes: (1) Kenney Jones, who replaced Moon in the band, was at the party and the two drummers chatted during the evening; (2) Moon died in the same room in which Cass Elliott had died four years earlier.
10. The title of this quiz - "Ladies and Gentlemen, Dig The Who" - comes from their introduction at one of their epic performances. Which one?

If you've ever watched the "Rock and Roll Circus," or "The Kids are Alright," you may remember Keith Richards, wearing an eye patch and smoking a cigar, saying, "And now, ladies and gentlemen, dig The Who!" before they play "A Quick One While He's Away." The Who never played the Ed Sullivan Show.
Source: Author d2407 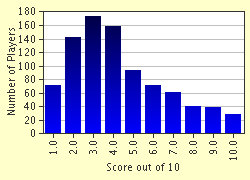 Related Quizzes
1. Thunderfingers Average
2. Song by Song: "My Generation" Easier
3. The Who Album Match Easier
4. The Who History Tough
5. Who's Greatest Lyrics Average
6. A Who Quiz for Who Fans Average
7. Fractured Songs by The Who Average
8. Baba O' Riley Difficult
9. Quadrophenia Tough
10. The Who Lyrics I Average
11. Essential Who Tough
12. Ultimate Who Average