How much do you know about the Who's second official rock opera release "Quadrophenia"? Take the quiz to find out! Thanks to www.wikipedia.org for some information for this quiz.

Quiz Answer Key and Fun Facts
1. What year was "Quadrophenia" released, from the Who?

The Who weren't hesitant to release another rock opera after their world-famous "Tommy" album, which was released in 1970. "Quadrophenia" was released on October 19, 1973.
2. The story of "Quadrophenia" is about a teenager named Jimmy, who praises the Mods and lives in England during the 1960s. Jimmy tells what has happened in his life the past days. How many days?

Jimmy has experienced a lot of terrible things to get to the bad state he is when he is telling the story. The album tells what happened to the teen Mod in the past two days.
3. The first half of "Quadrophenia" shows Jimmy's struggles with home life and his jobs. The first half also shows Jimm'y failed attempts of finding a what?

Alas, being a Mod isn't exactly all fine in Jimmy's case. Due to the fact of having all of these bad situations in his life, Jimmy turns to drugs and alcohol to solve his problems.
4. In "Quadrophenia", Jimmy gets kicked out of his home by his parents, after they discover his box of what?

Jimmy refers to the pills as 'blues'. Although it is never given what kind of pill the 'blues' are, the most educated guess is amphetamines.
5. In what song from "Quadrophenia" is it sung that Jimmy gets kicked out of his home after the discovery of his box by his parents?

After this incident, Jimmy takes a large dose of drugs and catches a ride on the famous "5:15" train.
6. Jimmy, being a Mod in all, meets his idol Ace Face, a leader Mod. However, Ace Face isn't the same man that Jimmy had admired for the past years. His new job is now a what?

Jimmy is angry at the fact that the man he worshipped has "sold out" and now works at a hotel near the beach. He gets frustrated at him and starts to go down a bad path.
7. Toward the end of the Who's rock opera "Quadrophenia", Jimmy gets so depressed when he looks back on the past days. His family and girlfriend and job has made him upset before, but he never expected the Mod life to make him depressed. Where does he go after these thoughts?


Answer: Out to sea

He steals a boat (while drunk may I add) and sails out into the middle of the sea, landing on a rock.
8. In "Quadrophenia", Jimmy now realizes that he has nothing to live for and so he crashes psychologically at the rock in the middle of the sea. He then has an epiphany, while the beautiful song "Love Reign O'er Me" plays on the album. True or False: "Love Reign O'er Me" is the last song on the album?

"Love Reign O'er Me" is a great song to end the famous "Quadrophenia" album. It has been received well by critics and was ranked number 266 on Rolling Stone's "500 Greatest Albums of All-Time".
9. "Quadrophenia" features Jimmy's personality splitting into four, each representing a member of the Who. Which member if the band was represented by the song "Helpless Dancer"?

Pete was presented in the song "Love Reign O'er Me", John in "Is It Me?" (or "Is It in My Head?"), and Keith in "Bell Boy".
10. Which song from the album were these lines taken from: "My jacket's gonna be cut and slim and checked; maybe a touch of seersucker, with an open neck"?

"I've Had Enough" ends side two of disc one on "Quadrophenia". This is where Jimmy just gives up and travels to the beach.
11. "Quadrophenia" has been a big inspiration to a lot of bands. What other famous rock opera was widely considered to be somewhat inspired by "Quadrophenia"?

Green Day's opera "American Idiot" is about a teenager who is struggling with an uncaring world, much like the plot and Jimmy's struggles in "Quadrophenia". "American Idiot" was released in 2004 and features hit songs like the title track, "Holiday", and "Boulevard of Broken Dreams".
12. Which song from the album were these lines taken from: "But only causes further pain; you realize that all along"?

"Helpless Dancer", as mentioned before, was Roger's personality in the album "Quadrophenia". This lyric is heard toward the end of the tune.
13. Pete, Roger, Keith, and John weren't the only men making the music for the Who's "Quadrophenia". What session man was brought in to play piano for some tracks on the album?

Chris Stainton also toured with the Eric Clapton band. Although Nicky Hopkins had helped the Who play piano on thier "My Generation" and "Who's Next" albums, he didn't play session pianos on any song for "Quadrophenia".
14. "Love Reign O'er Me" is the closing track to "Quadrophenia" and is a great song. Adam Sandler's movie "Reign Over Me" features a cover version of "Love Reign O'er Me" for the film. The cover is done by what band?

"Love Reign O'er Me" is my favorite track of the album and is a very great and moving ballad. Pete Townshend individually wrote all the songs for "Quadrophenia", the only time in the Who's career.
15. In honor of the album, "Quadrophenia" was made into a British film starring Phil Daniels. What year was this movie released?

"Quadrophenia" has been praised by people long after its release, where it got negative reviews. It remains a cult classic today. This marks the second time a Who rock opera was made into a film, the first being "Tommy". Townshend wrote the soundtrack for the movie.

All in all, "Quadrophenia" was been a fantastic album by the Who. It is one of the most famous rock operas ever made, and features some of the greatest tunes the Who have recorded. The album is a definite must have, and I hope you enjoyed the quiz. Rock on!
Source: Author thewho13rd 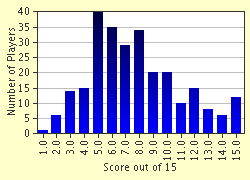 Related Quizzes
1. Thunderfingers Average
2. Song by Song: "My Generation" Easier
3. Ladies and Gentlemen, Dig The Who Difficult
4. The Who Album Match Easier
5. Who's Greatest Lyrics Average
6. The Who History Tough
7. Fractured Songs by The Who Average
8. A Who Quiz for Who Fans Average
9. Baba O' Riley Difficult
10. The Who Lyrics I Average
11. Essential Who Tough
12. Ultimate Who Average


Other Destinations
Explore Other Quizzes by thewho13rd