Music Is The Best Trivia Quiz

Quiz Answer Key and Fun Facts
1. What was the first album put out by the Mothers of Invention?

"Freak Out!" is arguably the first concept album and one that purportedly inspired Paul McCartney to come up with the idea of "Sgt. Pepper's Lonely Hearts Club Band".
2. According to the outrageous song "Punky's Whips", which of Zappa's drummers had a crush on Punky Meadows of the group Angel?

According to the introduction to the song: "Terry recently fell in love with a publicity-photo of a boy named Punky Meadows, lead guitar player from a group called Angel. In the photograph, Punky was seen with a beautiful shiny hairdo in a semi-profile which emphasized the pootched out succulence of his insolent pouting rictus, the sight of which drove the helpless young drummer MAD WITH DESIRE!"
3. On the albums "Joe's Garage" and "Thing-Fish", which rhythm guitarist played the characters of both Joe and the Thing-Fish?

"Joe's Garage" was the first album on which Ike Willis appeared. Ike ended up continuing with Zappa longer than any other member of the ever-changing band lineup.
4. What two performers sang lead on "Dog Breath" on the album "Just Another Band From LA"?

Flo (The Fluorescent Leach) and Eddie were at the time better known as Mark Volman and Howard Kaylan of The Turtles. Contractual obligations required that they perform under a different name when they joined The Mothers.
5. Who played the part of Ondrya Wolfson in the song "Valley Girl"?

"Valley Girl" was Zappa's highest charting single ever in the United States, reaching #32 ("with a BULLET!").
6. Which extremely popular Deep Purple song mentions "Frank Zappa and the Mothers"?


Answer: Smoke on the Water

"Smoke on the Water" was a true story about how the band Deep Purple came to record a live album in Switzerland. At the time, "Frank Zappa and the Mothers had the best place around, but some stupid with a flare gun burned the place to the ground." A member of the audience shot a flare gun into the ceiling, burning the whole building down.
7. When Zappa (or his lead singers) sang in German, what was inevitably mentioned in the song?

From "Once Upon a Time" to "Sofa #2" to "Stick It Out" to many more found on rarer discs, when Zappa sings German, he sings about a Sofa.
8. Which former Beatle plays on stage with Zappa and the Mothers on the album "Playground Psychotics"?

Yoko Ono also plays on the album, mostly performing high-pitched shrieks. In fact, the album includes the "song" called "A Small Eternity With Yoko Ono" on which the band plays strange ethereal music while Yoko does her stuff.
9. "Won Ton On" from the album "Thing Fish" is what song (also appearing on "Thing Fish") played backwards?


Answer: No Not Now

This is the freaky and unsatisfying conclusion to the "play" that Zappa wrote called "Thing Fish".
10. The cover of which Mothers album is meant to mock the Beatles' cover art for "Sgt. Pepper's Lonely Heart's Club Band"?


Answer: We're Only In It For The Money

This is largely considered to be Zappa's masterpiece, although I humbly disagree. It is Zappa's third album (and third concept album), and it pokes fun at the "phoney" world of hippies, their parents, the police, feminists, and rock stars. On the second half of the album, Zappa offers an alternative to these choices: be who you are, avoid being put into a category, and don't be afraid to go against the grain in your own way.
Source: Author oofahlandian 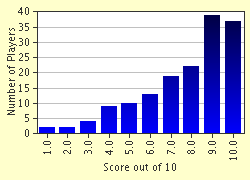 
Other Destinations
Explore Other Quizzes by oofahlandian