This quiz is about the rock band, The Rolling Stones. You're going to interview the Stones! Are you ready to start rolling along? Have fun with this one!

Quiz Answer Key and Fun Facts
1. Look I see one of the Stones coming over here now. Sir, sir, can you tell us a little bit about yourself? Sure, I was born in jolly ole' England in 1943. Some people think that the Rolling Stones would not be around, if not for me and my lips. I would like to think it was a joint effort between me and my friend. Give me a microphone and I'll blast the harmonica like crazy. So chap, can you figure out which Rolling Stone member this is?

Michael Philip was actually born in Dartford, England. Not only does Mick play the harmonica, but he's also the lead singer for the group.

Mick was married to Bianca Jagger for nine years, but they were divorced in 1980. He didn't marry Jerry Hall immediately, but waited until 1990 to tie the knot. The marriage was annulled in 1999.
2. Hey dude, is it true that The Rolling Stones were inducted into the Rock and Roll Hall of Fame in 1985?

The Stones were actually inducted into the Hall of Fame in 1989. Dion, The Temptations and Stevie Wonder were also inducted this same year.
3. Well, we've met the main leader of the band, but now let's meet the sidekick that also helped to start the group. Dude, we've heard that you like to jam on your guitar. You're also from England too, correct? Rumor has it that you were known as one of the Glimmer Twins. You were born right before Christmas. Cool, it's so good to meet you, but I can't think of your name. I'm so sorry, but what is your name?

Keith and Mick both were the original founders of the Stones. Mick and Keith knew each other when they were younger, but didn't click the band together until the early 60s. It's almost like they were meant to be. What do they call that, dude? Do you think it was a coincidence? I think not dude!

Keith married Patti Hansen in 1983 and they have three beautiful daughters together.
4. Wow, another band member! It's so good to meet you, dude! You were one of the earlier members of the group. You actually signed on as a bass player in 1962 and replaced Dick Taylor. We heard that Dick went on to form his own group, The Pretty Things. What is your name dude?

It's almost comical how everyone seems to move around in the band world. Brian Jones, who played guitar for the Rolling Stones, was previously with The Ramrods. Mick Taylor joined the Stones from the band, John Mayall and the Bluesbreakers.

Okay, dude, let's go back and chat about Wyman now. Bill was actually born William George Perks. I guess he could be called the coffee man. Perks; get it? Anyhow dude, he was born in 1936, also in jolly ole' England. Wyman left the group in 1993.
5. The Rolling Stones won two Grammy Awards in 1995. What were the two Awards for?

The Stones picked up the Best Rock Album for "Voodoo Lounge". They also picked up Best Music Video, Short Form for "Love is Strong".

"Love is Strong" was actually released on the album "Voodoo Lounge". The album was released in the United States and the United Kingdom in 1994.


Answer: Would you let your daughter marry a Rolling Stone?

The Stones hooked up with Andrew Oldham in the early 60s. He created the very famous question, "Would you let your daughter marry a Rolling Stone?" He obviously knew what he was doing, they signed on with Decca Records shortly after the question was asked. Some people weren't too fond of Mick Jagger and his luscious lips, but Oldman insisted on keeping Jagger and his famous lips!
7. Mick, Mick, please just one more question. You've had numerous hit singles in the United States. Which of these was NOT a number one hit by your group?

"Come Together" was written by John Lennon and performed by The Beatles.

The Rolling Stones have had numerous number one hits, including these mentioned above. "Angie" and "Brown Sugar" also hit the top spots.
8. I love the song "Jumpin' Jack Flash", that's my favorite song by your group. You can hear that song in quite a few movies too. What movie can you NOT hear the song "Flash" in?

In the movie, "Goodfellas", you could hear the songs, "Gimme Shelter", "Memo from Turner" and "Monkey Man". You can also hear the song "Jumpin' Jack Flash" in Whoopie Goldberg's movie too, titled "Jumpin' Jack Flash". Yeah yeah yeah you can!
9. Keith, can I ask you one last question? You provided a voice on the television series, "The Simpsons" with Elvis Costello, Tom Petty, Brian Setzer and Lenny Kravitz. What other member of the Stones provided a voice on this show with you?

Not only did Keith Richards and Mick Jagger team up in "The Simpsons", but they also appeared on "Saturday Night Live" together a few times.
10. Thanks so much for the interview guys; I really appreciate the few minutes of your time. Can I end on a note or two from "Satisfaction"? "When I'm drivin' in my car, and the man ______________ He's tellin' me more and more about some useless information Supposed to fire my imagination..."


Answer: comes on the radio

The Stones performed the first time on July 12, 1962 in London. Since this day they've been on the Licks World Tour, the Babylon Tour, the Irish Tour and many more.

They released their first album titled, "The Rolling Stones" in 1964 and since this date they've had numerous number one hits, including "Get Off of My Cloud" and "Paint It Black".

I tell you what guys; you CAN get "Satisfaction"!
Source: Author linkan 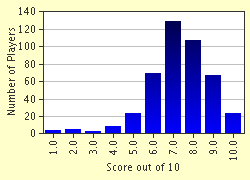 
Other Destinations
Explore Other Quizzes by linkan