A quiz for true Red Hot Chili Peppers fans. I give you the line, you give me the song

Quiz Answer Key and Fun Facts
1. "My body loves to scrump when I lick the ripe pick"

Apparantly, ex guitarist Dave Navarro witnessed his own mother's murder.
2. "Diviner than the dolphin, that there is none, coz dolphins just a like to have a lot of fun"

3. "Those guys are a couple of goats"

Ex guitarist Hillel Slovak died of a heroin overdose in 1988.
4. "Boy was he disturbed"

John Frusciante has false teeth due to his heroin addiction.
5. "Hey you mister interview, I don't have to answer you"

Flea's first instrument was the drums, then he picked up the trumpet, and now plays the bass.
6. "Like freaks of a feather we rock together"


Answer: 'Me and my friends'

Chad Smith has a daughter called Manon.
7. "What I am is a picture on the t.v screen"

Flea was born in Melbourne, Australia in 1962.
8. "I become the anarchist"


Answer: 'Johnny, kick a hole in the sky'

Anthony Kiedis owns two pet wolves, Howlin' Wolf and Handsome Devil.
9. "I love you, swim through me, good feelings, come to me"

Flea has a daughter called Clara with his ex wife Loesha.
10. "Johnny's in the basement mixing up the medicine"

The first song the Chili Peppers wrote was "Out In LA" from the album "The Red Hot Chili Peppers".
11. "Coz the angel and the devil kissed, they fell in love"

The MTV awards awarded the Chili Peppers with 2002's greatest rock band and best live act.
13. "It's raining in my cranium, my head feels like a stadium"

14. "Perfection is no test for me, because the best I'll ever be is just like you a human being"


Answer: 'Show me your soul'

15. "Three pounds of love and knowledge are expanding in my skull"

Before 1983, the Red Hot Chili Peppers were known as Tony Flow and the Miraculous Majestic Masters of Mayhem.
16. "I was walking through a courtyard, without shoes and without regard"

Both Chad and Anthony have had accidents on their Harley Davisons. Anthony broke his wrist and Chad had an operation on his shoulder.
17. "I was bleeding pretty good on to a daffodil"

In their youth, Anthony and Flea used to enjoy jumping off tall buildings into pools. Anthony missed once and sprained his back.
18. "Me and the giraffe laughed" 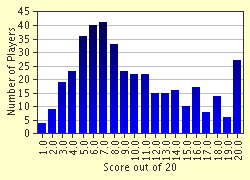 
Other Destinations
Explore Other Quizzes by boiled_pea