This is the second quiz I made on the Red Hot Chili Peppers. This quiz will test you on your knowledge of the guys and their music. Feel free to send me a note if you like the quiz. Check out my other quiz on them: RHCP Song And Album Quiz. Have Fun!

Quiz Answer Key and Fun Facts
1. Which person has not been in the Red Hot Chili Peppers?

Dave Grohl has been the drummer for Nirvana. He also has done vocals, and played guitar and drums for the Foo Fighters.
2. Which two members are from the original band?

Anthony is the lead singer. Flea plays bass.
3. What is Flea's real name?


Answer: Give It Away

'Blood Sugar Sex Magik' was a very successful album for the Red Hot Chili Peppers.
8. Who was the guitarist for 'One Hot Minute'?

Dave Navarro was also the guitarist for Jane's Addiction.
9. Which of these songs has been released as a single? 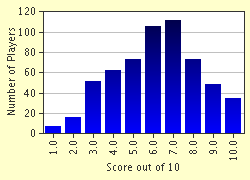 
Other Destinations
Explore Other Quizzes by tricksiegirl