The third of my quizzes on the early days of Rush, covering up to the release of 'All the World's a Stage'.

All of Rush's first four albums, with the exception of a few sessions for their eponymous debut, were recorded at Toronto Sound.
2. Who produced '2112'?

Terry Brown co-produced all Rush's albums between 'Fly By Night' and 'Signals'. At the time, he was often called 'the fourth member of Rush.'
3. To whom was '2112' dedicated?

Ayn Rand (1905-1982) was a writer who, through her novel 'The Fountainhead' and novella 'Anthem', greatly influenced Neil Peart.

When questioned about the influence 'Anthem' had on '2112' he said, in a 1984 interview published by 'Modern Drummer', "Our album 2112 happened to be based around, in a coincidental way, the circumstances of one of her stories, I gave due credit to that. I realized that, as our story progressed about the re-discovery of creative music in the future, her story happened to be about the rediscovery of electricity in some totalitarian future. I didn't set out to adapt that story into a musical format. But the story of 2112 developed, and THEN I realized that it paralleled the circumstances of her story."
4. According to the '2112' sleeve notes, who is the leader of the 'The Priests of the Temples of Syrinx'?

Neil has never commented on this but it is clearly a salute to Terry Brown.
5. According to the '2112' sleeve notes, what is the name of the Narrator's closest friend?

No explanation has been given for this choice of name. Perhaps it was chosen because it is, generally, seen as the name of an ordinary man.
6. Which song on '2112' was inspired by a 1960s TV show?

The song references three episodes from the classic series created by Rod Serling - 'Where is Everybody?' (in which a man wakes up in an empty town), 'Stopover in a Quiet Town' (in which a couple wake up in what appears to be a giant sized doll's house) and 'Will the Real Martian Please Stand Up' (in which a man takes off his hat to reveal a third eye in his forehead).
7. Who designed the cover for '2112'?

Hugh Syme also played keyboards on the Geddy Lee-written song 'Tears'.
8. Who wrote the story, based on the album story and featured in the '2112' tour book?

Geoff Barton, while writing for UK music paper 'Sounds', was an early champion of Rush in their early days, although he cooled towards them around the time of 'Hemispheres'. He later went on to edit heavy metal magazine 'Kerrang!'.
9. Upon release, '2112' was considered a flop.

For the most part, Rush played an abridged version of '2112', omitting most of 'Discovery' and 'Oracle: The Dream' before cutting down to 'Overture/The Temples of Syrinx'. However, on the 'Test For Echo' tour, '2112' was played in its entirity.
11. Where was 'All the World's a Stage' recorded?

The mixing of the tapes, most of which came from the third night recorded, took over a month, not the five or six days the band expected.
13. What was the name of the radio station only sampler that Cliff Burnstein compiled in an effort to get Rush more radio play?


Answer: Everything Your Listener's Wanted to Hear by Rush...But You Were Afraid to Play

The track listing for the album was '2112' (edit); 'Something For Nothing'; 'Making Memories' and 'Bacchus Plateau'. The sampler is quite rare and highly prized among Rush collectors.
14. Which Marvel comic was dedicated to the members of Rush and featured a story line based upon '2112'?

Not being a comic book fan, I can really tell you anything about this issue. I just thought it was a nice piece of trivia.
15. Rush made their first appearence outside of North America on June 1, 1977. At which venue did they play?

Geddy mentioned this fact when they played at Sheffield Arena on the 'Roll the Bones' tour in 1992.
16. Who supported Rush on the UK leg of the 'All the World's a Stage' tour?

Stray seemed to have been consigned to the 'where are they now?' file. If anyone who can give any information on them, I'd be grateful.
17. How many countries did Rush visit on the European leg of the 'All the World's a Stage' tour?

The tour included seven UK shows at Sheffield, Manchester, Birmingham, London, Newcastle, Glasgow and Liverpool as well as one Swedish date in Stockholm. I know some Scots will say that the answer should be three, recogniosing Scotland as a seperate country, but the official tour book calls it a UK tour so I'm sticking with that.
18. Which new song, which would appear on their next studio album, was debuted at the Sheffield City Hall show?

And 'Xanadu' was a main highlight of their live set on the R30 tour.
19. Who is the credited photographer on the 'All the World's a Stage' cover?

A stunning array of photographs from the Massey Hall were provided.
20. Where did the title of 'All the World's a Stage' originate?

JAQUES:
"All the world's a stage,
And all the men and women merely players:
They have their exits and their entrances;
And one man in his time plays many parts"
Source: Author yyz2112 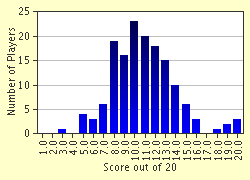 
Other Destinations
Explore Other Quizzes by yyz2112