You'll have a snippet of lyrics and just need to match the song title to them. There's no theme - unless you happen to know what's on my playlist.

Possibly the best known song ever recorded by the Eagles, 'Hotel California' was written by Don Henley, Don Felder and Glenn Frey. The single, released in 1977, reached number one for only one week on the Billboard Hot 100 chart, and a relatively low position of eight on the UK Singles Chart. It did receive the accolade of being the Grammy Record of the Year in 1978, though.
2. Open your eyes and look at the day

'Don't Stop' was one of the songs on Fleetwood Mac's best selling album 'Rumours', which came out in 1977. Christine McVie wrote it and shared the singing duties with Lindsey Buckingham. The song was one of four singles released from the album and reached number three on the US Billboard Hot 100.
3. Living is easy with eyes closed

There are so many songs by The Beatles to choose from, but 'Strawberry Fields Forever' won out. John Lennon wrote the song, inspired by playing in the grounds of the property called Strawberry Field close to his childhood home in Liverpool. As a single, the song was coupled with Paul McCartney's song 'Penny Lane' as a double A side in 1967. Somewhat surprisingly, it didn't reach number one on the singles charts in either the UK or USA.
4. Baby we can talk all night

Meat Loaf's album 'Bat out of Hell' was released in 1977 and remains one of the best known, and best selling, albums of all time. Apart from the title track, the album included 'You Took the Words Right Out of My Mouth' and 'Paradise by the Dashboard Light'. 'Two Out of Three Ain't Bad' was released as a single, with only limited chart success.
5. Some expression in your eyes

'Oh Yeah' appeared on 'Flesh and Blood', the album released by Roxy Music in 1980, which also featured 'Over You' and 'Same Old Scene'. Bryan Ferry wrote 'Oh Yeah', which begins with the words quoted in the question, but may be better remembered for the lines 'there's a band playing on the radio'.
6. For my darling I love you

'Love Me Tender' was one of Elvis Presley's earlier hits, from 1956. The tune was taken from a ballad called 'Aura Lee', with new lyrics credited in part to Elvis himself. The song was one of many number one hits for the king, reaching the top of the US Billboard Hot 100.
7. I wish nothing but the best for you

'Someone Like You' appeared on Adele's second album, '21', released in 2011. The song lyrics are about her longing to find someone similar to the lover she has lost, now married to someone else. Released as a single, the song was a huge worldwide hit for Adele, reaching number one in many countries, including the UK and USA.
8. You're so self satisfied I don't need you


Answer: I Want to Break Free

The song was written by John Deacon, the bassist for Queen, and appeared on the band's album called 'The Works', issued in 1984. The video for the song showed the band members getting in touch with their feminine side. dressed in female clothes. As a single, 'I Want to Break Free' was a number three hit in the UK, but managed only a ranking of 45 on the US Billboard Charts.
9. Some people stay far away from the door

'An Innocent Man' was the title track from Billy Joel's 1983 album, which also included 'The Longest Time' and 'Uptown Girl'. Released as a single in December of that year, the song registered at number ten on the US Billboard Hot 100 and number eight on the UK Singles Chart. All the songs on the album were designated as tributes to the music of Joel's youth: 'An Innocent Man' was listed as honouring Ben E. King and The Drifters.
10. All I do is eat and sleep and sing

This is just one of many hits for the Swedish group ABBA. It was written, as most of the group's songs were, by the two male members, Benny Andersson and Bjorn Ulvaeus. The song did particularly well in Europe, hitting the top of the charts in most countries, including the UK.

It reached only 45 on the US Billboard Hot 100, although it did rather better on the Hot Dance Club Play chart, reaching number one.
Source: Author rossian 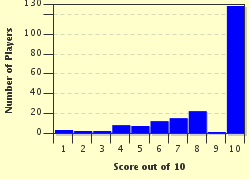