Still know Nirvana "With the Lights Out"? Quiz

This is a quiz to prove how much you know about the kings of grunge.

Quiz Answer Key and Fun Facts
1. What is the only song on the box set "With the Lights Out", in which Kurt Cobain does not sing?

Dave Grohl wrote and sang "Marigold".
2. What does Dave Grohl throw a cymbal at in one of the hidden tracks in the box set's dvd?

You can find the hidden track at the ending credits of the dvd.
3. What is the name of Kurt and Courtney's daughter?

Kurt and Courtney chose "Bean" as the middle name because they thought she looked like a bean in her sonogram.
4. Copies of one single were withdrawn or destroyed from store shelves after Cobain's death. Which of these was it?

Genuine copies are worth hundreds of dollars and are extremely rare!
5. What is the name of the baby on the "Nevermind" album cover?

Spencer was four months old at the time of the photo.
6. What 2005 movie was based off of Kurt Cobain?

The movie was directed by Gus Van Sant.
7. Who was the guitarist added to Nirvana during "MTV Unplugged"?

In later years, Pat joined Dave Grohl in the Foo Fighters.
8. What was the bonus song on the "In Utero" UK album called?


Answer: Gallons of Rubbing Alcohol Flow Through The Strip

Kurt's is Donald, and Krist's is Anthony.
10. Kurt was a roadie for which band?

He also tried out for the Melvins in the 1980s.
Source: Author OnlyInDreams

This quiz was reviewed by FunTrivia editor agony before going online.
Any errors found in FunTrivia content are routinely corrected through our feedback system.
Most Recent Scores
Jan 23 2023 : Guest 172: 8/10
Jan 06 2023 : Guest 98: 9/10 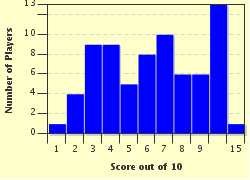 
Other Destinations
Explore Other Quizzes by OnlyInDreams