Often described as an 'intelligent new wave' band, Talking Heads was difficult to categorize. Their music varied from punk to new wave and from African rhythms to contemporary country music. Test your knowledge of Talking Heads trivia in this quiz.

Quiz Answer Key and Fun Facts
1. What is the name of the band drummer Chris Frantz and singer David Byrne formed before Talking Heads?

The Artistics mostly performied cover songs. One of the first original songs they did was "Psycho Killer", which become Talking Heads' first hit a couple of years later.
2. Chris and David convinced Tina Weymouth, Chris' girlfriend, to join them in the band in 1975 and become the bassplayer. She wasn't a musician at that time - but what did she do for a living?


Answer: Salesperson at a shoestore

While working at the shoestore, Tina studied at Rhode Island School of Design, just like Chris and David.
3. What was Talking Heads' first released single?

Although "Love -> Building on Fire" was the bands first single, the track was not included on their debut album "Talking Heads 77". In fact, it was never released on any of the bands studio albums. The song is available on Talking Heads compilations only.
4. Which Talking Heads song can be found on the compilation album "Attack of the Killer Bees" (1978), which contains a collection of B-sides by many new wave/punk artists?


Answer: I Wish You Wouldn't Say That

The song was the B-side of the British "Psycho Killer" single. The American single had an acoustic version of "Psycho Killer" on the flipside.
5. For their second album, Talking Heads teamed up with producer Brian Eno. Where was it recorded and mixed?

The band went to the Bahama's in February 1978 to record the album, which was released later that same year.
6. The album "Fear of Music" opens with the song "I Zimbra". Where do the lyrics come from?


Answer: Based on a nonsense poem

Musically, Talking Heads experimented with African rhythms for the first time in this song. The lyrics make no sense at all; they are an extract from a dadaistic poem by Hugo Ball.
7. What Talking Heads lyric has a reference to CBGB's, the New York venue where the band first started?

This is the lyrics where C.B.G.B. is mentioned.
8. Who directed the video for the song "Once in a Lifetime"?

Toni Basil directed both the videos for "Once in a Lifetime" and "Crosseyed and Painless". She's also well-known for the one hit wonder "Hey Mickey" with the cheerleader video.
Jim Jarmusch directed the video for "The Lady Don't Mind", Karen Murphy the one for "Wild Wild Life". Brian Eno produced "Remain in Light", the album "Once in a Lifetime" is on.
9. In 1982, after four studio albums and a lot of touring, Talking Heads released a double live album while all bandmembers were working on their solo projects. What's the title of this album?


Answer: The Name of this Band is Talking Heads

An expanded and remastered version of "The Name of This Band is Talking Heads" was released on CD 22 years after the original vinyl release. "Stop Making Sense" was the bands 1984 live album, "Live on Tour" is a promo only live album, put out by Sire reocrds in 1979. "Electricity" is the title of one of the bands most well-known bootlegs.
10. 1983 marked the release of "Speaking in Tongues", which was released with two different covers. The original one, a special package designed by a german artist, was too expensive to produce, so David Byrne made an alternative cover. The special package was released as a limited edition - who designed this package?

Rauschenberg designed a plastic envelope package with clear discs that could spin around. The record inself was pressed on clear vinyl.
11. What's the main difference between the vinyl and cassette releases of the "Speaking in Tongues" album?

The cassette contains extended versions of the songs "Making Flippy-Floppy" (which even contains an extra verse!), "Girlfriend Is Better", "Slippery People", "I Get Wild/Wild Gravity" and "Moon Rocks". These versions wouldn't fit on the vinyl record.
12. "Stop Making Sense" (1984) is both a concert movie and a live album. Both open with "Psycho Killer" in a special arrangement - what's special about the "Stop Making Sense" version of "Psycho Killer"?


Answer: David plays guitar over a the drumtrack playing on a ghetto blaster

David enters the stage, puts down his ghettoo blaster and says "Hi - I got a tape I wanna play". He presses the play button, a drumbeat starts and he starts playing his guitar. With every next song in the movie an extra bandmember comes on stage.
13. Who sung "People Like Us" in the movie "True Stories"?

Actor John 'Fred Flintstone' Goodman sung the movie version of "True Stories", which is available as B-side of the "Wild Wild Life" seven inch single only. David Byrne sings the original album version.
14. What two animals are featured on the artwork of the 1988 album "Naked"?


Answer: A monkey and a fly

The monkey is pretty obvious, the fly can be found on the wooden frame. The fly is actually the logo for Fly, the production company of "Naked".
15. In 2005, Rhino released a boxset with remastered versions of all Talking Heads albums. What's the name of this boxset?

Brick contains all Talking Heads albums remastered by Eric ET Thorngren and Jerry Harrison, in both surround 5.1 and stereo 2.0 audio.
16. Brian Eno produced three albums for Talking Heads. On his own album "Before and After Science", he included a secret tribute song to Talking Heads. What's the title of this song?

"King's Lead Hat" is an anagram for "Talking Heads".
17. The song "Stay up Late" on the album "Little Creatures" is about a little baby. Which baby?

Robin Weymouth became a pioneer electronic artists himself, using the alias Kid Ginseng
18. The Muppet show did a spoof of a famous Talking Heads song once - which one?


Answer: Once in a Lifetime

Demme's next film projects included "Silence of the Lambs" and "Philadephia" (which featured a cover of the Talking Heads song ""Heaven").
20. Which band opened as support act for Talking Heads during the UK tour in 1980?

Besides U2, a little band called Dire Straits were opening act for Talking Heads once as well.
Source: Author francey 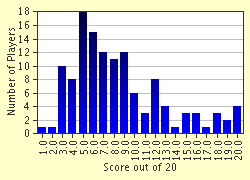 
Other Destinations
Explore Other Quizzes by francey