This quiz is on four Led Zeppelin hits. They are "Trampled Underfoot", "The Song Remains the Same", "Kashmir" and "Achilles Last Stand". It's a tricky quiz and those of you that don't recognize one of the songs should listen to them first. Good Luck!

Oddly enough, Robert Plant used strange treatments because he was self-conscious of his voice in this song.
2. Kashmir is a real place.

The song was based on the Middle Eastern style of music in Kashmir.
3. How old was Robert's daughter when the band reformed to perform "Trampled Underfoot" at her birthday party?

Although it may seem like a slightly inappropriate song for someone's daughter, it's still loved by many a Zep fan. Plant's daughter, Carmen, was also mentioned in Zeppelin's hit song "The Ocean".
4. What famous rapper sampled "Kashmir" for one of his songs in 1998?

Now known as P. Diddy, the rapper performed the song entitled "Come With Me" on Saturday Night Live with Jimmy Page himself.
5. According to the Greek myth, what part of Achilles was his weakness?

It was, to be more specific, his heel and he was killed due to it in the Trojan War. The song's title has a bit of irony because Plant's ankle was injured in a car accident before the recording of the song.
6. How many members of the band were credited with the creation of "Kashmir"?

This was one of the few pieces where Bonham contributed but John Paul Jones did not. Robert called this the definitive Zep song over "Stairway"!
7. Which song contains three real places within it's lyrics?


Answer: The Song Remains the Same

The lyrics go as follows: "California sunlight, sweet Calcutta rain, Honolulu starbright, the song remains the same".
8. I won't blame you if you get this one wrong. Which Page guitar tuning was used in "Kashmir"?

The DADGAD was also used on "Black Mountain Side" and was one of Page's most famous tunings. CACGCE was used on "Friends" and "Bron-Yr-Aur", while the open C was used in "Hats Off to (Roy) Harper". A modified DADGBE was used in "Moby Dick".
9. Which song was originally an instrumental?


Answer: The Song Remains the Same

The idea of an instrumental is made clear by the long guitar intro.
10. I'll leave you with a tough one. What kind of guitar did Jimmy Page use in "Achilles Last Stand"?

Page used all of these at some point of his Zeppelin career. The most famous of which was his custom double-necked. Thanks as always for playing my quiz!
Source: Author sideshowtrivia 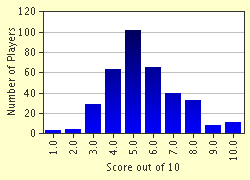 
Other Destinations
Explore Other Quizzes by sideshowtrivia