A quiz for all Tom Delonge lovers.

Many of us know him as just Tom Delonge but he also has a middle name.
2. When is Tom Delonge's birthday?

Tom Delonge was the youngest member of the band Blink 182.
3. In the Blink 182 video for "All The Small Things" Tom Delonge plays a Fender Stratocaster.

It is a mint green colour. He also uses the same guitar in other Blink 182 videos.
4. Who played at Tom Delonge's wedding when he married Jennifer Jenkins?

He finally tied the knot with his girlfriend Jennifer. She suprised Tom by asking them to play at their wedding. Jimmy Eat World are one of Tom Delonge's favourite bands.
5. Which film has Tom Delonge appeared in?

He played the role of a window server at place called Burger Jungle.
6. Tom Delonge does not sing any of the lyrics in the Blink 182 song "Adam's Song".

The whole song is sung by bandmember Mark Hoppus.
7. Tom Delonge is a father.

He has a daughter called Ava.
8. "Say it ain't so I will not go". Tom Delonge sings this line in which famous Blink 182 song?


Answer: All The Small Things

This is one of the most famous Blink 182 songs.
9. What is the name of the band Tom Delonge started in 2005 without his bandmates Mark and Travis from Blink 182?

When Blink 182 went on a hiatus in February 2005, everyone thought the band was just taking a break but then later on in the year Tom Delonge returned to share his new band with everyone.
10. Tom Delonge once said "In ten years I will become president of the United States Of America"?

The "Urethra Chronicles Two" video is where you will find Tom say this.
Source: Author kerrybaby 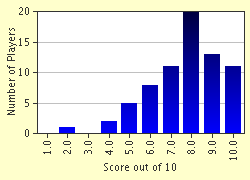 
Other Destinations
Explore Other Quizzes by kerrybaby