An easy quiz for anyone who has heard of Victoria Beckham.

Victoria was born on 17 April 1974 which is the same day as other famous people such as Rowdy Roddy Piper, Canadian professional wrestler.
2. What is Victoria's maiden name?

Victoria was known as Victoria Adams before she married David Beckham; she is one of few celebrities who have publicly changed their surnames after marriage.
3. Has Victoria Beckham had a number one single from her solo career?

Victoria has had nine number one singles in the UK as part of the Spice Girls, but has not had such success as a solo artist.
4. Which of the following Victoria Beckham songs was not released as a single?


Answer: That Kind of Girl

"That Kind of Girl" came from Victoria's album titled "Victoria Beckham" but was never released as a single. "Not Such An Innocent Girl" and "A Mind of Its Own" were both released from the same album. "This Groove" was going to be on the album "Open Your Eyes" but the album was cancelled; the song was still released and reached number three in the UK Singles Chart.
5. What successful Girl Band was Victoria a part of?

Victoria was a part of the Spice Girls, who had nine number one singles in the UK during their initial run. She was known as Posh Spice.
6. Which of these film roles has Victoria Beckham tried out for?

Victoria tried out for the role of Lara Croft in "Lara Croft: Tomb Raider" (2001) but lost the role to Angelina Jolie.
7. Which record label has Victoria not worked with?

Victoria has been with Virgin, 19 and Telstar; either as part of the Spice Girls or during her solo career. It is unlikely that she will ever be with BMG as she has said that she is not interested in singing unless it is with the Spice Girls. The Spice Girls are releasing a "Greatest Hits" album, under EMI and it is expected that this will be their last album.
8. Which TV series has Victoria Beckham made a cameo appearance in?

In July 2007, it was announced that Beckham was shortly to begin filming a cameo appearance playing herself in an episode of the second season of ABC TV's series "Ugly Betty".
9. A repeat of which television show was watched by more viewers than the first showing of Victoria's reality show titled "Victoria Beckham: Coming to America"?

It was the third most watched programme in its time-slot and received viewing figures of 4.9 million in America, beaten by a repeat of "Wife Swap".
10. In 2000, Victoria's luggage was lost on a flight. What was it she demanded in light of this?

Yes, she demanded free airfare for life. I can imagine this ridiculous demand was rejected.
Source: Author quizman12 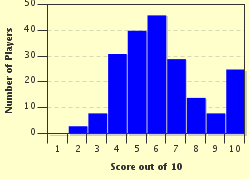 
Other Destinations
Explore Other Quizzes by quizman12