Trivia about George VI and Queen Elizabeth. Theirs lives were played out in a time of great change. Born into one era they saw the rapid change of social values and the great advancement of technological change.

He was affectionately known as Bertie by his family.
2. Who were his parents?

Like his father he was the second son.
3. On what date was Elizabeth Angela Marguerite Bowes-Lyon born?

4. Who were Elizabeth Bowes-Lyon's parents?

Lady Elizabeth Bowes-Lyon is decended from Henry VII.
5. In what year did Bertie and Elizabeth marry?

It was a lengthy and determined courtship and his proposal was not accepted the first time.
6. How many children did they have together?

Princess Elizabeth born April 21, 1926 and Princess Margaret born August 21, 1930.
7. Bertie had an impediment that Elizabeth helped him overcome. What was the impediment?

8. Why did Bertie and Elizabeth become King and Queen?


Answer: His brother abdicated without leaving an heir

9. When the Luftwaffe bombed Buckingham Palace on September 10, 1940 what did the Queen comment?


Answer: 'I am glad we've been bombed. It makes me feel I can look the East End in the face.'


Answer: 'The most dangerous woman in Europe.'

11. In what year did Princess Elizabeth marry Phillip Mountbatten?

12. George VI was the last sovereign to hold what title?


Answer: To remove one lung because of cancer

14. What date was the coronation of King George and Queen Elizabeth?

15. Who was the British Prime Minister when the King and Queen ascended the throne?

He handed over to Neville Chamblerlain later that month.
16. After he became king what title did he deny his brother's wife?

17. In the context of royal history, George VI was one of only a few English (or Anglo-British) monarchs who did what?


Answer: succeeded the throne in the lifetime of his predecessor.

Henry IV, Edward IV, Richard III, and William III were the other four.
18. The King was the first monarch to do what?

19. Before becoming King and Queen what were their Majesties titles?

20. The King refered to the Royal Family as what?

21. On what date did King George die?

22. After the King's Death the Queen became Dowager and was affectionately known by what title?

23. The Dowager Queen blamed him for the king's Death. Who was he?

She felt the undue stress placed on him after the abdication greatly affected his health and ultimately led to his death.
24. The Dowager Queen died when?

25. King George and Queen Elizabeth are entombed where? 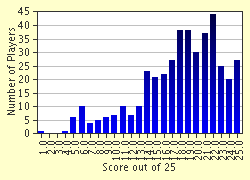 
Other Destinations
Explore Other Quizzes by FilmGuy1570