In the Realm of Nobel Laureates Quiz

This is a quiz about Nobel Laureates. It will also provide you with some bits of information about them.

Share on Facebook
Share on Twitter
Share by E-Mail
Author
TANU
Time
3 mins
Type
Multiple Choice
Quiz #
262,265
Updated
Dec 03 21
# Qns
10
Difficulty
Average
Avg Score
6 / 10
Plays
338
This quiz has 2 formats: you can play it as a or as shown below.
Scroll down to the bottom for the answer key.

Quiz Answer Key and Fun Facts
1. Who among the following did not share the 1947 Nobel Prize in Medicine?

Gerty and Carl Cori came from St. Louis, Missouri. They received half the award and the Board gave the other half to the Argentinean, Houssay. The Coris discovered how glycogen is catalytically converted.
2. In which field did Dr. Donald Glaser win the Nobel Prize?

The reporters at the press conference in 1960 for Dr. Donald Glaser, an American, enjoyed the fun. His trip to Stockholm had doubled for a honeymoon, and jesting reporters had enquired of Mrs. Glaser, "Did you know he was going to get the Nobel Prize - is that why you married him?"
3. In which year did Dr. Otto Hahn receive the Nobel Prize?

Dr. Otto Hahn received the chemistry award for discovering the fission of heavy nuclei, which affected physicists everywhere and led to the atom bomb.
4. Who among the following did not share the 1903 Nobel Prize in Physics?

The trio shared the award, for their joint researches on radiation phenomena. The Curies each got one- fourth of the prize and Becquerel got one- half. The Curies were too exhausted from overwork to attend the Ceremony. The French Minister to Sweden picked up their award. However, they did appear the following summer for their money, in time to remain eligible.
5. Which of these four was the youngest when they received their Nobel Laureate?

Marie Curie was the first person to win two Nobel Prizes. The second time, she was a widow. This second time, though she was ill, she did attend the ceremony. She was in her forties, a lonely woman, but lovely and devoted to her career. She arrived there with her sister and daughter.
7. In which field did Dr. Frederick Banting win the Nobel Prize?

Dr. Frederick Banting, of Canada, who won the award in 1923, was just 32 years of age.
8. In which field did Julius Wagner von Jauregg, win the Nobel Prize?

In 1927, the psychiatrist and physician, Julius Wagner von Jauregg, won the Board's award for malaria innoculation used in paralysis.
9. Who became the first Nobel laureate in chemistry?

In 1901, Jacobus Hendricus van't Hoff, of the Netherlands, received the award as he had founded stereochemistry. The academy's choice was universally praised.
10. Irene and Frederick Joliot-Curie won the Nobel Prize in which field?

Marie Curie's daughter, Irene Curie, had married one of her mother's junior assistants at the Institute of Radium, an impoverished young man named Frederick Joliot, who had graduated from L'Ecole de Paris.
Source: Author TANU

This quiz was reviewed by FunTrivia editor DakotaNorth before going online.
Any errors found in FunTrivia content are routinely corrected through our feedback system.
Most Recent Scores
Jan 20 2023 : wellenbrecher: 10/10
Dec 10 2022 : GoodwinPD: 10/10 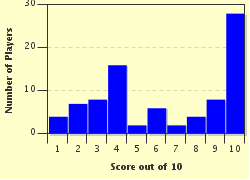 
Other Destinations
Explore Other Quizzes by TANU