A quiz on the lives and wives of the many French kings named Louis.

Share on Facebook
Share on Twitter
Share by E-Mail
Author
askpau
Time
4 mins
Type
Multiple Choice
Quiz #
171,465
Updated
Dec 03 21
# Qns
10
Difficulty
Average
Avg Score
6 / 10
Plays
722
This quiz has 2 formats: you can play it as a or as shown below.
Scroll down to the bottom for the answer key.

The Carolingian dynasty (A.D. 800-987) was named after Charlemagne. Louis I, the son of Charlemagne, reigned from 814 to 840. The last Carolingian king was Louis V, who died in 987. He was succeeded by Hugh Capet, Count of Paris, the founder of the Capetian dynasty.
2. You may know that Eleanor of Aquitaine was Queen of England through her second marriage to Henry II, but she was Queen of France before that. Which Louis was Eleanor's first husband?

Eleanor of Aquitaine had two daughters with Louis VII (1121-1180), but no sons. The king wanted an heir and the marriage was annulled on the grounds of consanguinity in 1152. Ironically, Eleanor then proceeded to have 5 sons as Queen of England. Richard the Lionheart, Eleanor's son by her second marriage, was betrothed for a while to Princess Alice, Louis VII's daughter by his second marriage.
3. Many of the kings named Louis are known by nicknames. Which of the following pair is mismatched?


Answer: Jean was born after the death of his father.

Jean I is called "le posthume" ("the posthumous") because he was born after his father's death. The succession was suspended when Louis X died because the Queen, Clemence of Hungary, was pregnant. Their son Jean was born 5 months later and automatically became king at birth, but he only lived for 8 days. He was succeeded by his uncle Philippe V.
5. Louis XII, who reigned from 1498 to 1515, married a princess from the British Isles. What was her name?

Louis XII (1462-1515) married Mary Tudor, the daughter of Henry VII and younger sister of Henry VIII, as his third wife in 1514. He was 52 at the time of their marriage, she was 18. Louis died the next year, and Mary married Charles Brandon, Duke of Suffolk, a few months later.

Their granddaughter was Lady Jane Grey, the "nine days' queen". A few decades later, Mary Stuart (i.e. Mary, Queen of Scots) became Queen of France as the wife of Francis II.
6. Here's one for fans of "The Three Musketeers". Anne, the wife of Louis XIII, was born in which country?

A trick question, perhaps, but Anne of Austria was actually a Spanish infanta. She was born in Madrid in 1601 to King Philip III of Spain and Queen Margarita. Her family, the Habsburgs, ruled both Spain and Austria at the time and I guess "Anne of Austria" has a better ring to it than "Anne of Spain".
7. Louis XIV was succeeded in 1715 by Louis XV, who was his ____.

Louis XIV outlived both his eldest son (Louis, the Grand Dauphin) and grandson (Louis, Duke of Burgundy). As a result, the throne passed to his great-grandson, Louis XV.
8. Which of the following was NOT married to a Spanish princess?

Louis XV was married to Marie Leczinska, a Polish princess. Louis VIII married Blanche of Castile, Louis XIII married Anne of Austria (see Q.6 for explanation of why she was Spanish), and their son Louis XIV married Maria Teresa of Austria (another Spanish Habsburg), his first cousin.
9. Louis XVII was born before Louis XVIII.

This quiz was reviewed by FunTrivia editor fringe before going online.
Any errors found in FunTrivia content are routinely corrected through our feedback system.
Most Recent Scores
Jan 31 2023 : Guest 101: 10/10
Dec 26 2022 : PHILVV: 10/10 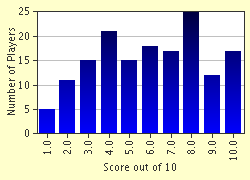 
Other Destinations
Explore Other Quizzes by askpau