This quiz features famous people with the same names. I will give you two clues for each question and you match it with the proper name.

Anne Hathaway (1555/6-1623) was the wife of William Shakespeare. They were married in 1582 when he was eighteen and she was twenty-five and pregnant with their first child, Susanna, born in 1853. Two years later Anne gave birth to twins Hamnet and Judith.

Actor Steve McQueen (1930-1980) was an "anti-hero", the rebellious young man who became a star in the counterculture years. He first starred on the TV Western "Wanted: Dead or Alive" as a bounty hunter, and went on to become a top film star in movies like "The Great Escape", "Bullitt" and "The Magnificent Seven".

Commodore Matthew C. Perry (1794-1858) fought in both the Mexican-American War and the War of 1812. He was also responsible for helping to open Japan to the West. He was known as "The Father of the Steam Navy", in addition to being the younger brother of Naval Commander Oliver Hazard Perry.

Actress Jane Seymour was born in 1951 in London, England. Her birth name was Joyce Penelope Wilhelmina Frankenberg. She starred in the TV Western "Dr. Quinn, Medicine Woman" (1993-1998). She was also in the 2005 movie "Wedding Crashers" with Vince Vaughn, and the James Bond film "Live and Let Die" (1973).
5. Baltimore Ravens wide receiver and TV journalist

American football player Burnell Michael "Mike" Wallace III played as a wide receiver for the professional NFL team, the Baltimore Ravens. He has also played for the Pittsburgh Steelers, Miami Dolphins and the Minnesota Vikings. In 2011 he was selected to play in the NFL Pro Bowl.

American journalist Myron Leon "Mike" Wallace (1918-2012) was one of the original correspondents on the TV newsmagazine "60 Minutes" which began airing in 1968. He was on the radio show "Information Please" in 1939, enlisted in the Navy in World War II, became a radio announcer and then moved to television in the 1960s.
6. British explorer and Welsh actor

Then there's the handsome Welshman, Richard Burton (1925-1984) known for his acting, his deep voice, his affairs and his two marriages to Elizabeth Taylor. Among his notable films are: "Who's Afraid of Virginia Woolf" (1966), "The Robe" (1953) and "Cleopatra" (1963).
7. Radio personality and Anna Nicole Smith's boyfriend

You may have heard of radio personality and self-proclaimed "King of All Media", Howard Allan Stern. Stern was born in Queens, NY in 1954. He began working for radio station WXRK in New York City in 1985. His morning show was syndicated the following year. He has authored best-sellers "Private Parts" and "Miss America".

The other Howard is Howard Kevin Stern, a Santa Monica attorney. His main claim to fame is that he was the agent and partner of model and actress Anna Nicole Smith. He was with Anna when Anna's son, Daniel Wayne Smith, died in the Bahamas.
8. "Manchester by the Sea" actress and Destiny's Child

Tenitra Michelle Williams uses her middle name as her stage name. She was born in 1980 in Illinois, and she is an American pop and gospel singer. In 1999 she was a back-up singer for Monica. The following year she joined Destiny's Child, producing hits like "Survivor" and "Bootylicious".
9. Baseball relief pitcher and co-founder of the Beach Boys

Brian Douglas Wilson was born in California in 1942. He was the co-founder of the Beach Boys. He was an innovator who wrote or co-wrote more than half of their top forty hits. In the late 1990s, he began to perform as a solo act. Despite mental health problems, Brian was inducted into the Rock and Roll Hall of Fame in 1988.

Brian Patrick Wilson was a professional baseball player who was a relief pitcher in Major League Baseball. He played for the San Francisco Giants and the Los Angeles Dodgers. He was often nicknamed "The Beard".
10. "Survivor" winner and "Battlestar Galactica" actor

It was the year 2000 and a new show called "Survivor" was airing. The reality/game show was set in Borneo where contestants had to compete to see who could "outwit, outplay and outlast" each other. Jeff Probst was the host; the very first winner was Richard Hatch, a man who later found himself with tax problems.
11. "SCTV" actor and founder of Wendy's

When you 'google' Dave Thomas (1932-2002), the founder of Wendy's comes up. Wendy's is a fast-food chain of restaurants named after his daughter, Melinda Lou, who had trouble saying her name...so she was nicknamed "Wendy". Dave opened his first restaurant in 1969, and went on to appear in over 800 commercials.

Dave Thomas is a Canadian actor/comedian. He is, perhaps, best known as Doug McKenzie, a part he played on the comedy skit show "SCTV" and in the 1983 movie "Strange Brew".
12. Miss America 1984 and "Melrose Place" actress

Vanessa Lynn Williams is an actress, a singer and a former Miss America 1984. Vanessa went on to act in films like "Eraser" (1996) and "Shaft" (2000). She had a hit song with "Colors of the Wind" from "Pocahontas", and she played Wilhelmina Slater, the devious supermodel and Director of Mode magazine in "Ugly Betty".

Vanessa A. Williams is an actress also born in NYC. She has appeared on the TV Showtime drama "Soul Food" (2000-2004). Vanessa played Maxine Joseph-Chadway; she received an NAACP Image Award for Outstanding Actress in a Drama.
(Coincidentally, Vanessa L. Williams was in a 1997 movie named "Soul Food".)
13. "American Idol" judge and son of Katherine

When I first watched "American Idol", one of the judges was Randy Jackson. I thought he was the Randy Jackson who was the brother of Michael. Nope. This Randy Jackson is a bassist, singer and record producer who was born in Baton Rouge, LA in 1956. He was also an executive producer on "MTV's America's Best Dance Crew".

Now we come to the Randy Jackson who WAS brother to Michael Jackson. This Randy was born Steven Randall "Randy" Jackson in Gary, IN in 1961. He was the youngest brother and was not part of the Jackson 5 which consisted of Michael, Jermaine, Tito, Jackie and Marlon.
14. Art Vandelay and Britney Spears' ex-husband

If you were a fan of "Seinfeld", then you may have recognized the name Art Vandelay, the alter ego of George Costanza. George, on occasion called "Lord of the Idiots", was the guy always in the wrong line, getting the short stick, complaining about everything. He was wonderfully played by Jason Alexander.

You may not be familiar with the other Jason Alexander. His claim to fame is the fact that he was a childhood friend of Britney Spears and the two got married in 2004. The marriage lasted 55 hours; it was annulled.
15. "Clerks" director and Detroit Lions running back

Kevin Gregory Smith was a college football player at the university of Central Florida where he was an All-American. He played professionally in the NFL as a running back for the Detroit Lions from 2008 to 2012.
Source: Author nyirene330 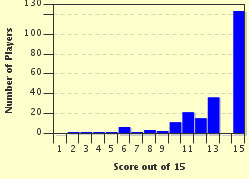