This quiz is the second in a series. All Biblical references are based on the King James Version of the Bible. AS ALWAYS, PLEASE FEEL FREE TO OPEN YOUR BIBLE WHILE ANSWERING!

Quiz Answer Key and Fun Facts
1. In which book of the Bible do we find God, or YWHW, referred to as "The Ancient of days?"

In Daniel 7:9-14, Daniel describes a night vision in which he sees the Son of man approaching the "Ancient of days" with the clouds of heaven. At this time, in verse 14, it states that he was given an everlasting dominion, glory and an indestructible kingdom, and that all people, nations and languages would serve him.

This book is a book of prophecy, and as such, should be viewed as unfulfilled events that will occur in the future (at least, Daniel's future).
2. Once, there was a man who asked Jesus in a very cynical manner, "What is truth?" Jesus let the rhetorical question ride without answering it, because He had just told the man that He Himself was a witness to the truth. (John 18:37-38) The man was Pontius Pilate, and Jesus had just been delivered to the Roman authorities for trial. The same author, John, later gave a more in-depth explanation of truth in 1 John 5:6-13. What comprises this truth, according to John?


Answer: the Spirit (of God)

Since most Christians believe that Christ is the Son of God, (the Word), and the Father and the Holy Ghost are all a part of God's nature, it is quite natural to them that they should accept all three as authoritative as God.
3. In the book of James, we see an example of hypocrisy posing as compassion. He asked a rhetorical question in response to what he perceived to be a lack of genuine caring by those who considered themselves to be Christians. In James 2:14-17, he addressed the following problem: If someone is destitute, cold, hungry and in need, where is the justification in telling them to go in peace; to be warm or filled without providing for their need? What does James say about such callousness toward our fellow man?


Answer: "But wilt thou know, oh vain man, that faith without works is dead?"

Many Christians hold that works do not help one to "buy" a way into God's kingdom, but faith alone is required. However, true faith will result IN good works, thereby proving the faith of the believer.


Answer: at the house of God

There is a question asked at the end of this verse:
"For the time is come that judgement must begin at the house of God; and if it first begin at us, what shall the end be of them that obey not the gospel of God?"

The next verse reiterates this theme, as it points out that if the righteous people are scarcely saved from destruction and torment, then where will the un-godly people be?
5. You may be familiar with the books of 1st and 2nd Kings, in the Old Testament, but in the Greek Septuagint, there were four books of the Kings. Which books in the Christian Bible had been known as such to the Greeks?

The Greek title for the series of 1-4 Kings was Bibloi Basileion, or "The Books of Kingdoms". The Latin Vulgate called the books Libri Regum, or "Books of the Kings".
Later, the Latin Bible combined the Hebrew ("Melechim" - Kings) and the Greek titles for the first two of these books, calling them Liber l and Liber ll Samuelis, or first and second Samuel. The remaining two books became known as Liber Regum Tertius et Quartus, or Third and Fourth Kings. Without the first two books, however, this became pointless, so they were then changed to simply 1st and 2nd Kings.
6. When Abraham's nephew Lot fled from Sodom with his wife and two daughters, only Lot and the two daughters escaped safely. His wife, as many people know, looked back towards Sodom, and was turned into a pillar of salt. Into what city, which had been slated for destruction by God along with Sodom and Gomorrah, did the three escapees enter after their flight? (Genesis 19:17-23 King James Version)

Zoar was spared because Lot asked permission of God to enter it, according to verse 21 of this passage. The name Zoar means "little one" or "to be small", and in his plea to God, Lot even mentioned the fact that the city is a little one.
7. How does 2 Peter 3:10-13 (in the King James Version) describe what the end of the earth will be filled with?

The 13th verse of this scripture says that "...the heavens will pass away with a great NOISE, and the elements shall melt away with fervent HEAT, the earth also and the works therein shall be BURNED UP."
8. After Jesus raised his friend Lazarus from the dead, a man who had been buried in a tomb for four days, someone got the bright idea that they should just kill Lazarus again in order to discredit Jesus' work, as if Jesus could not simply perform the same miracle again. According to John 12:1-11 in the King James Version, who came up with this brilliant plan?

Yep, The chief priests of God devised this one. The 11th verse tells of their rationale:
"Because that by reason of him (Lazarus), many of the Jews went away, and believed on Jesus."
They did not go through with the plan.
9. According to Proverbs chapter 1 verse 7 in the King James Version, what is the beginning of knowledge?


Answer: the fear of the Lord

This first chapter of Proverbs is largely devoted to knowledge, wisdom and understanding. The author, King Solomon of Israel, seems to be attempting to convey the thought that, without God, no spiritual knowledge can take place. Knowledge and wisdom are not necessarily synonymous; they can be very independent of each other.

He states here, very plainly, that apart from God, man can have no true knowledge.
10. To whom was the apostle Paul writing when he made the following statement? "For we brought nothing into this world and it is certain that we can carry nothing out."

In the book of 1 Timothy 6:7, Paul reminds Timothy of this simple fact.
The message that he gives throughout this chapter to the young minister is filled with warnings, encouragement and things for him to teach his congregation, as well as things that he should not tolerate from them. Paul took a very active interest in this young Greek/Hebrew man's life, and mentored him for a good while.
Source: Author logcrawler 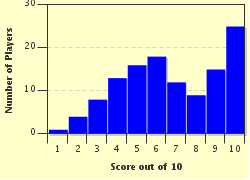