A Little Help From Above Trivia Quiz

Some call them superstitious, others crazy, but these men would vouch for their 'lucky charms' any day and time!

Quiz Answer Key and Fun Facts
1. One of test crickets greatest opening batsman, was obsessed with his clothes. He had to wear something new for each match he played in. Another oddity he had was that he always walked to the right side of his partner (when going to bat). He popularised the wearing of the skull cap (instead of helmets) or should I say - he was one of the few who wore a skull cap. Who was this player?

'Sunny', as he was better known, was the first batsman to score 30 centuries and 10,000 runs in test cricket. After his retirement, he became a television commentator.
2. This cricketer always carried a red handkerchief in his trouser pocket. He positioned the cloth in such a way that part of it always protruded out of the pocket! Talk about inciting a 'bullish' bowler. Who was this player?

Mohinder was the son of Lala Amarnath, the first captain of Independent India. Mohinder was the man of the match in the 1983 World Cup finals.
3. This cricketer always carried a red rag in his trouser pocket. However, he didn't use it to play the matador (he used it simply to wipe his face). Of course he never sent it to the laundry - he prefers to wash it himself. Now talk about lucky charms. Who is he?

Another oddity is the fact that he has never changed his baggy green cap. The captain of the 'Aussies Invincibles' - he led the Australian team to a record breaking 16 consecutive test match victories and was the captain of the Aussie team which lifted the 1999 World Cup. Another captain with 'red cloth riches' is Saurav Ganguly.
4. Two captains were known for this eccentric behaviour (though I doubt whether they are the only two). They never shaved during a test match (at least tried to avoid it as much as possible). One was an Aussie, the other an Indian. The first lifted the World Cup once. The second one is a big 'dada'. Who were these two cricketers?

Border was the captain of the Aussie team which lifted the 1987 World Cup. Ganguly led his team to the finals of the 2003 World Cup (where they lost to the Aussies!). 'Dada' is Ganguly's nickname.
5. This cricketer, an Indian, meditates and stretches before his grand parents before every match (at least in front of their portrait). He was so superstitious that he added an extra 'K' in his surname. Who was this player?

Kris or Krishnamachari Srikkanth became a coach, and later a television commentator after his playing stint. He even led India in a few series.
6. During the final of a one-day tournament, the entire Indian team in the dressing room didn't get up from their respective positions in the room. Well, their 'sacrifice' did pay off - they successfully chased a 300 plus score. Which match was this?

It all started after the fall of Sachin Tendulkar's wicket; that is when Yuvraj Singh and Mohammed Kaif helped India chase the score set by England. This was NOT the only time Indian team did this. During Kapil Dev's innings of 175 not out against Zimbabwe (1983 World Cup), the team was not allowed to budge from their respective positions!
7. This Indian cricketer had a pendant on his neck (given to him for religious purposes). He used to kiss it occasionally while batting. He had a lot of other habits like raising his collar while fielding, circling his head twice before batting, etc. Who is this player?

Azhar had a peculiar fixation with watches too. He was one of India's most successful captains. He was later charged with match-fixing and banned from playing (guess those good luck charms were not meant for off-field activities).
8. If you thought 'superstitions' were restricted to players, think again. This highly revered umpire dreaded the 'Nelson's number' more than anything else in this world, for he had to hop as long as the score remains on that number. Who is this umpire?

Shepherd was one of the umpires for the final between Australia and India at ICC World Cup, 2003. He'd officiated in all World Cups from 1983.
9. This English wicket keeper had a peculiar habit of touching the bails before taking strike. While he was one of England's most prolific 'Behind the stumps' man. He was, also a more than a useful batsman. Which cricketer are we talking about here?

It is said that during the Oval test in 1971, Engineer (Indian Wicket keeper) covered the bails with his hands so that Knott couldn't touch them! The result - Knot didn't contribute much in that innings!
10. In a particular test match innings, Sachin Tendulkar used to run up to Anil Kumble before the latter started a fresh over; take his (Kumble's) sweater and hand it over to the umpire (A.V Jayaprakash). Sachin believed that this was a good luck charm and by doing this, he was helping his ace bowler pick up wickets. How many wickets did Kumble pick in that innings?

Kumble picked up all 10 wickets (second test against Pakistan at Ferozshah Kotla, Delhi on Sunday 7th February 1999), thus becoming only the second bowler in history to do so.
Source: Author ace_sodium 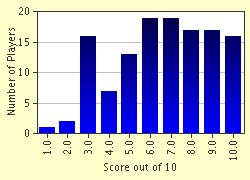