The BBC Sports Personality of the Year Award has been held annually since 1954. This is the fifth in a series of quizzes on the athletes who have been honoured over the years, covering 1994-2008.

Share on Facebook
Share on Twitter
Share by E-Mail
Author
Supersal1
Time
5 mins
Type
Multiple Choice
Quiz #
305,116
Updated
Dec 03 21
# Qns
15
Difficulty
Average
Avg Score
11 / 15
Plays
564
Awards
Top 35% Quiz
This quiz has 2 formats: you can play it as a or as shown below.
Scroll down to the bottom for the answer key.

Quiz Answer Key and Fun Facts
1. The 1994 winner lost his father in a plane crash in 1975. This was rather ironic as both father and son remained relatively unscathed during successful Formula One careers. Who was the 1994 winner?

Damon Hill became the lead driver for Williams in 1994 after the death of Ayrton Senna at the San Marino Grand Prix. It was only his second full season of F1 racing. Hill was only one point behind Michael Schumacher for the Championship at the start of the last race of the season, the Australian Grand Prix.

Their two cars were involved in a collision when Schumacher's car left the track, thus putting them both out of the race and ensuring that the one point difference remained. Hill went on to win the Championship in 1996.
2. Jonathan Edwards, the 1995 winner, set a new world record that year. In which event did he do this?

Jonathan Edwards actually set three world records that year - 17.98 metres on 18th July and 18.16 metres and 18.29 metres on 7th August, the latter winning him a Gold Medal at the European Championships at Gothenburg.

In an echo of the film "Chariots of Fire", Edwards initially refused to compete on a Sunday because of his strong Christian beliefs and indeed missed competing in the 1991 World Championships because of this. However, he managed to reconcile his beliefs with his athletic commitments, enabling him to make his mark on the Triple Jump event
3. There was a tie for Overseas Sports Personality of the year in 1996. A runner and a boxer shared the title. Who were they?

Michael Johnson won gold medals in the 200 metres and 400 metres at the Atlanta Olympics that year. He set a record time of 19.32 seconds for the 200 metres. He won gold medals in three consecutive Olympics - Barcelona in 1992, Atlanta in 1996 and Sydney in 2000.
4. In 1997 someone born outside of Great Britain won the domestic title. Who was this?

Tennis player Greg Rusedski was born in Canada. His mother was British, which enabled him to take up British Citizenship in 1995. In 1997 he reached the finals of the US Open and the quarter finals of Wimbledon.
5. Which teenage footballer won the title in 1998?

Michael Owen first played for Liverpool at the age of eighteen. In his first full season of playing professionally (1997-1998) he tied for the position of the Premier League's top scorer. He also played for England in 1998, scoring two goals in the early rounds of the World Cup.
6. Lennox Lewis won the title in 1999. In which country was he born?

Lennox Lewis is of Jamaican descent. He was born in East London and his family moved to Canada when he was twelve years old. He beat Mike Tyson to take the WBC World Heavyweight Championship in 1997, and beat Evander Holyfield in November 1999 to take both the WBA and the IBF World Heavyweight Championships.
7. Rower Steve Redgrave won the title in 2000. How many Olympic gold medals did he win in his career?

David played for Manchester United from 1993-2003. During that time, they won the Premiership six times. He has also played for England 108 times. He holds the dubious distinction of being the first England captain to be sent off during the course of a match.
9. Paula Radcliffe won in 2002. In what discipline did she make her mark?

2002 was Paula's first year in running the marathon, and a very successful one it was. She won both the London and Chicago Marathons that year, as well as retaining her World Championship Cross Country title, which she had won the previous year.
10. Rugby Player Johnny Wilkinson's last minute goal in the Rugby World Cup Final won both the Cup for England and the title of Sports Personality of the Year for Johnny in 2003. Who did England beat in the final?

The score was tied at 17-17 with 26 seconds remaining of the match when Johnny delivered his famous drop kick. He had failed to score with the previous three attempts in the match. He also won the title of International Rugby Board International Player of the Year in 2003.
11. Which runner won the title in 2004?

Kelly Holmes is an ex-army sergeant who once had to compete in an army men's 800 metres race, as she was so much faster than the competitors in the women's event! She won gold medals for the 800 metres and 1500 metres at the Athens Olympic Games in 2004.
12. Cricketer "Freddie" Flintoff won the title in 2005. What is his real given name?

"Freddie" scored 24 wickets and 402 in the test series against Australia in 2005, leading to England winning The Ashes. He was named Man of the Series. He celebrated England's win by going on a marathon drinking spree, but still managed to show up looking only a little the worse for wear for the victory drive through the streets of London.

He was nicknamed "Freddie" after Fred Flintstone.
13. An equestrienne won the title in 2006, following in the footsteps of her mother, who won in 1971. Who was the 2006 winner?

Zara is the daughter of Princess Anne and Captain Mark Phillips, both keen riders. In 2006 she won gold medals in both individual and team events at the FEI World Equestrian Games. She had to pull out of both the 2004 and 2008 Olympics as her horse, Toytown, was injured.
14. Joe Calzaghe won in 2007. What was his chosen sport?

Joe Calzaghe won a points victory against Mikkel Kessler, winning him the World Super-middleweight title. He retired early in 2009 and has the distinction of being undefeated in all 46 of his professional fights. Super-middleweight boxers weigh in at a maximum 168 pounds.
15. Chris Hoy won the award in 2008. True or false: He won four gold medals for rowing at the 2008 Olympics?

He won three gold medals for cycling - for the team sprint, the individual sprint and the Keirin.
Source: Author Supersal1 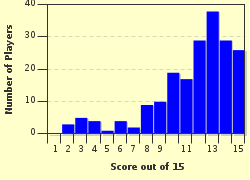