This is a quiz on symbols that stand for things in baseball. Have fun.

Quiz Answer Key and Fun Facts
1. Edgar Renteria was playing SS for the Cardinals in 2004. Where was he playing?

Shortstop is the postition by second base and in between 2nd and 3rd.
2. I am figuring out my BA. What do I now know?

This stands for batting average which can be found by dividing hits by at bats.
3. I just put another K on the board. What feat did I just accomplish?

When baseball scoring was being developed, in the 1860s, S was used for single, R for run, and I for inning so something else was needed for a strikeout. The letter K was, presumably, chosen as it was the most prominent letter in the word (and it comprised three strokes when writing, being the three strikes for the strikeout).
4. I just got a double and an RBI. What did I just bat in?

It sometimes stands for Run batted in, but since I said an, meaning only one, I could not accept runs. Sorry.
5. I just got a BOB aka BB. What happened?


Answer: I Got Walked

BoB stands for base on balls, which would mean that I got walked.
6. Yippy, I just got the first SB of the season. What did I get?

Really it stands for stolen base, but I decided I would go easy on this one.
7. I just struck out on a slider. How would I write this in baseball initials?

HR stands for home runs which would complete the sentence. H stands for hits, GS would stand for grand slams or games saved, whichever you want, and SLG stands for slugging.
9. Tino Martinez came from the AL Yankees to come and play for the St. Louis Cardinals. What does the A stand for in AL?

AL stands for American League and he came to the Cards who are in the NL, the National League.
10. The shortstop just fumbled the ball and made an error. If I am keeping track of the score how would I write this?

I had to give you that one.
Source: Author Cardys 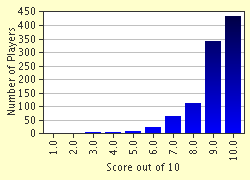 
Other Destinations
Explore Other Quizzes by Cardys