An all multiple choice quiz about Major League teams. You pick which team the question is about. I hope you enjoy it. :)

The Yankees had incredible runs going to back to the 1930s. In the 1940s, they went to five World Series and won four of them. In the 1950s, they made eight appearances while winning six.
2. Batting for the Triple Crown is a rare feat in baseball. Which American League team was the first to have three Triple Crowns batted on their team?

Ted Williams of Boston hit the first two in 1942 and 1947. Carl Yastrzemski put the cherry on the pie in 1967. The Cardinals franchise goes back to 1882 when the franchise was the St. Louis Brown Stockings of the American Association. In the 19th and 20 century, the St. Louis franchise had an amazing four Triple Crown seasons.

McGraw began managing in 1899 at the helm of the Baltimore Orioles of the National League. He shared the Giants in 1902. He would be a fixture until midseason 1932 and was replaced by Bill Terry. John would take the Giants to 10 National League pennants and three World Series crowns.
4. Which team was on the winning end of the 1919 Black Sox Scandal?

The Black Sox Scandal was all about players on the Chicago White Sox, trying to rig the World Series for money because they felt that their owner wasn't paying them enough. The Reds won that World Series, five games to three. The incident was made into a movie, "Eight Men Out".
5. Which National League team had five consecutive Rookie of the Year Award winners in the 1990s?

The Dodgers were famous for their farm system, created by Branch Rickey. The Dodger winners were Eric Karros 1992, Mike Piazza 1993, Raul Mondesi 1994, Hideo Nomo 1995, and Todd Hollandsworth in 1996.
6. This 1927 American League team had tremendous power and talent, arguably more talent than the Yankees (Murderers Row) in that season. They rostered Mickey Cochrane, Jimmy Dykes, Al Simmons, Ty Cobb, Eddie Collins, Zack Wheat, Jimmie Foxx, Lefty Grove, and others. They still finished 19 games behind the Yankees. Which team was this?

After spending 22 seasons with the Tigers, 1927 was Cobb's first season with the Athletics. Those listed all batted over .300, except for Grove who pitched his way to a 20-game season. The 1927 Yankees were known as 'Murderers Row' with names of Babe Ruth, Lou Gehrig, Bob Meusel, and a host of others. The Yankees won the 1927 World Series over the Pirates, four games to none.
7. Which team had the first manager that won two Manager of the Year awards with them?

The team was the Tigers, and the manager was Sparky Anderson. The Manager of the Year Award began in 1983. Anderson won his first in 1984, the season that the Tigers won the World Series. His second came in 1987 with the Tigers after their AL East crown. They went on to lose in the ALCS to the Twins.
8. This team experienced their own earthquake in addition to the earthquake that occurred in their 1980s World Series. Who was this team on the losing end of that World Series 'shake-up'?

The AL pennant-winning Oakland Athletics met the NL champion Giants in the 1989 World Series. Mother Nature put the series on hold when she let loose in game three. The series was postponed for 10 days due to the earthquake, then the Athletics picked up where they left off. Oakland won by the scores of 5-0, 5-1, 13-7, and 9-6. The Athletics outscored the Giants 32-14.
9. In baseball's decade of the 2000s, which team saw four Cy Young awards come their way?

Randy Johnson of the Diamondbacks won three of those Cy Youngs in the decade. He won them in 2000, 2001, and 2002. Brandon Webb won the team's fourth in 2006. The Twins and Indians were the only American League teams to win it twice in the decade.
10. Manager Connie Mack would set a Major League record, most likely never to be duplicated. He had the reins of the same team for 50 seasons. Which team was this?

Mack managed the Pittsburgh Pirates in the late 1890s before taking on the new Philadelphia Athletics in 1901. He kept control over the team until he stepped down in 1950. Connie took the As to eight American League crowns, and won five World Series. He died in 1956 at the age of 93.
Source: Author Nightmare 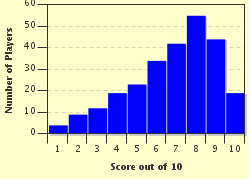