These players were chosen by the Baseball Writers Association of America. Putting them in a specific lineup order was my choice.

Quiz Answer Key and Fun Facts
1. Leading off and playing DH is a man who saw time in Milwaukee, Minnesota, and won a ring in Toronto. Who was he?

Although Molitor didn't draw many walks, he is a prime candidate to lead off. The man was a hitting machine. When healthy, he was guaranteed to hit close to .300 and went over that mark 12 times during his career. He could run as well. He stole over 30 bases eight times.
2. In the two-hole and playing center field is someone who is widely regarded as the best player ever. Who was this man who won a World Series title in 1954 and was Godfather to another player who is also spoken of as best ever?

Mays had a career batting average of over .300, hit 660 home runs, and drove in over 1,900 runs. He was a 24-time All-Star and a two-time MVP. He is also Godfather to one Barry Bonds.
3. The player who bats third in any lineup should be the team's best hitter. Who better on this team to bat third than the man who, more times than not, is seen as the game's best hitter to ever play? This man played for Boston and won the triple crown in 1942 and 1947. Who was this guy who played left field?

Is 2,600+ hits and 521 home runs enough to qualify as the best hitter of all-time? Perhaps not, but imagine if World War II and the Korean Conflict never happened. Williams lost several seasons of MLB service when he was called to duty. There is no doubt in my mind Williams would have flown way past 3,000 hits and 600 home runs. Williams did manage to bat .344 over his career and only a handful of players could claim they had a better average. Only one of these high-average hitters could attempt to match power with Ted, that being Rogers Hornsby.
4. Hero, legend, savior, and god. Only one man in the history of Major League Baseball has been called all of those things. This man was the game's first superstar. He transcended the game like none other before him. He was solely responsible for one franchise's rise to greatness and many would say he was the reason for another franchise's fall from grace. Who was this right fielder?

Babe Ruth played for Boston from 1914-1919. During his time there, the Red Sox won the championship three times in 1915, 1916, and 1918. When Ruth was sold to New York, Boston had to wait many decades before winning again. Meanwhile, Ruth led the Yankees to the championship four times.

He won 12 home run titles during his career and only twice during the 1920's did he fail to win that crown. Whatever Boston got for Ruth, it wasn't enough.
5. Playing first base and batting fifth is a man who needs no introduction, but I'm going to give him one anyway. This man played his entire career in New York. He won two MVP Awards and won the triple crown in 1934. Who was he?

Gehrig was more than an MLB icon. He was a man of all men. In an era of players quick to fight, Lou was humble and respectful. Major League Baseball recognized this and created an award named after Gehrig. The Lou Gehrig Memorial Award is handed out each year to a player who shows impeccable character and integrity.
6. The sixth hitter is a man who hit .400 three times while playing second base for the Cardinals. Who was he?

This was a guy who, six seasons in a row, led the league in batting average, slugging percentage, and on-base percentage. Hornsby owns the second highest career batting average of all-time with .358, behind only Ty Cobb.
7. Batting seventh and playing third base is a man who played his whole career in Philadelphia. Who was this guy who hit well over 500 home runs?

Schmidt's career achievements look like a laundry list of amazing. He was a 12-time All-Star, three-time MVP, 10-time Gold Glove winner, and won eight home run titles.
8. Batting eighth is the man who many feel was the best catcher to ever play. This man was an integral part of Cincinnati's "Big Red Machine" during the 1970's. Who was he?

Bench dominated his position during the late 60's and 70's. He won 10 straight Gold Gloves from 1968-1977. He was selected as an All-Star for 13 straight years, as well. He won two MVP Awards and helped the Reds win two championships in 1975 and 1976.
9. For the ninth hitter, we go back old school again, and I do mean old school. This shortstop is the only player in this lineup who can say he played during the 19th century. Most famous for a very expensive baseball card, who was this man who locked down the shortstop position for Pittsburgh?

Wagner's career started in 1897 for the Louisville Colonels. He played three seasons for them and went to Pittsburgh and spent the rest of his career there. His career batting average is .327 and he accumulated over 3,400 hits. Pretty good, but the highest form of praise about Wagner came from Ty Cobb. Cobb himself called Wagner the greatest star to ever play. Knowing Cobb, he meant the greatest ever besides himself. That was Ty Cobb in a nutshell, but seriously, praise from Cobb meant you were great at what you did.

As far as the very expensive baseball card goes, Honus Wagner's T206 card was once sold to a private collector for $2.8 million.
10. We have our starting nine. Now we just need a pitcher. Who better than a man with over 400 wins and over 100 shutouts during his career? Who was he?

Johnson threw 110 shutouts to be exact. 20 more than the guy in second. 31 more than the man in third. He is also second on the all-time wins list behind only Cy Young.

It is worth noting that the Baseball Writers Association of America chose two starting pitchers to be on this team, one righty and one lefty. Sandy Koufax was the lefty chosen.
Source: Author Anton 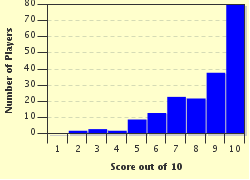 
Other Destinations
Explore Other Quizzes by Anton