Do you know where every Major League Baseball team played? Then stop reading and take the quiz!

Quiz Answer Key and Fun Facts
1. To which city did the Yankees move when they left Baltimore in 1903?

They moved from Baltimore in 1903 and played at Hilltop Park until 1919, and then played at the Polo Grounds until 1923 when they moved into Yankee Stadium

When they move in 1903 they changed their name from Baltimore Orioles to NY Highlanders. Thye became the NY Yankees in 1913.
2. Which of these teams began playing in Boston in 1907, and was still in that city in the 1990s?

They were previously the Boston Pilgrims. The Boston Red Sox played at Fenway Park.
3. The White Sox and the Cubs played in the same city, from the 1900s to the 1990s?

The White Sox (American League) and Cubs (National League) both played in Chicago.
4. The team that played in Houston, Texas during the 1990s was the ______ ?

The Astros played at the Astrodome in Houston, Texas.
5. Which of these teams played in Canada during the 1980s?

Did you say Browns? Tsk tsk, the Browns weren't even a baseball team in those 2 decades! The last Browns were the St Lousi Browns, who became the Baltimore Orioles in 1954. The Blue Jays played in Toronto, Canada.
6. The Mets and Dodgers were playing on opposite coasts of the United States during the 1970s, 80s and 90s?

The Braves: Atlanta, Georgia.
9. If you were in California in 1969, how many teams could you go see play?

11. If you found yourself at the Great American Ballpark in Cincinnati, which team would you most likely see there?

The Turtles? What was I thinking!?
12. From 1970, the Brewers and the Orioles played on different coasts of the United States?

Nope, not Washington, D.C. :(
15. Philadelphia is home of the Liberty Bell, the first Continental Congress and what baseball team, in 1945? 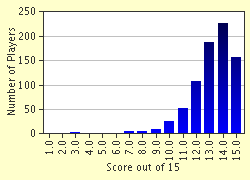