All multiple choice created especially for the novice baseball fans who appreciate the game of Major League Baseball. I hope that you enjoy it and learn something new. :-)

Quiz Answer Key and Fun Facts
1. Who was the first player to hit 30 home runs in a season?

After playing in the Minor League with Baltimore, the Babe became a Boston Red Sox pitcher in 1914. He continued to be a full-time pitcher until 1918. He set a season record for home runs with the Red Sox in 1919 when he smacked 29. He was sold to the Yankees for the 1920 season, and set an unbelievable record of smashing 54 home runs for New York. Ruth would hit 50+ home runs four times in his career, and retire with 714.

The Babe played with the Yankees until 1934, then he spent his final season with the Boston Braves of the National League.

When Ruth retired in 1935, Lou Gehrig was number two for career home runs with 378. The Babe batted a career .342 and had a pitching record of 94-46. The Hall of Fame took George Herman Ruth in 1936 during the first induction ceremony.

He died in 1948 at the age of 53.
2. Which manager in 2008 took a team to the postseason for the 13th consecutive season, falling just one season short of tying a record?

Joe took the Yankees to 12 consecutive playoffs from 1996-2007. The Yankees and Torre departed after the 2007 season, and he packed his bags for Los Angeles to take over the Dodgers. In 2008, Joe took the Dodgers to their first NL West division title since 2004.

The manager that took a team to 14 consecutive postseasons was Bobby Cox of the Atlanta Braves. Bobby's streak ran from 1991-2005. He took them to every postseason except for the 1994 season, which had no playoffs because it was a strike-shortened season. Cox was in his 24th season of managing the Braves in 2008 where they played below .500 ball, and did not make the playoffs for the third consecutive season.
3. Who was the Cy Young Award named after?

Young began his career in the 1890s with the Cleveland Spiders of the National League. He played a couple of seasons with St. Louis, then became a member of the Boston Americans (later Red Sox) in 1901. He retire in 1911 with an amazing 511 wins. As it was normal for a pitcher in that era to appear in 40 games in a season, Cy appeared in 40+ games, 15 times.

His season high for appearances was 55 in 1891. His season high for wins was 36-12 in 1892. Young's 511 wins will probably never be surpassed. Denton True "Cy" (short for cyclone) Young died in 1955 at the age of 88. Major League Baseball began the Cy Young Award in his honor in 1956, given to the most outstanding pitcher in the season.

The others never played for the Yankees. Larsen pitched in 14 seasons, but only five with the Yankees. He came to the Yankees in 1955 and threw a 9-2 record. 1956 saw him go 11-5 from both the starting position and the bullpen. The 1956 World Series saw the Yankees go up against the Dodgers. Yankee pitching great Whitey Ford started game one and lost, then Larsen in a 13-8 loss in game two. Ford won game three, then Tom Sturdivant won game four. Larsen started game five and pitched the gem of a lifetime, defeating the Dodgers 2-0 with his perfecto.

The Yankees went on to win the series, four games to three by winning game seven 9-0. The MVP of the series was Larsen for going 1-0 and throwing seven strikeouts.
5. Minnesota Twin Johan Santana won the Cy Young Award and threw a Triple Crown in 2006. Which team did Santana pitch for in 2008?

In 2006, Johan went 19-6 along with 245 strikeouts for the season. He still however finished seventh in the voting for the MVP, while Twin teammate Justin Morneau won the award. Teammate Joe Mauer also finished sixth in the voting ahead of him. Amazingly, Johan began his baseball career as a centerfielder at his Liceo Jose Nucete Sardi High School.

As a Met in 2008, Johan allowed more than 200 hits in a season for the first time in his nine-season career. 2008 came down to the last two games of the season for the Mets again, and again on September 28, it was the Florida Marlins who defeated them and knocked them out of the playoffs.
6. What was the name of the Houston Astros franchise before being named the Astros?

The Mets and Colt .45s joined the National League in 1962 as expansion teams. This made for 10 teams in the league, the same as the American League. The Colt .45s were managed by Harry Craft in their first season, won only 64 games and finished in eighth place.

The franchise would finish no better than eighth place in their first seven seasons. In 1965, they changed their name to the Astros. They won their first division title in 1980, the year of the Philadelphia Phillies, and lost to the Phillies in the NLCS three games to two. Game five of that series saw the Phillies win it in extra innings 8-7. Under the management of Phil Garner, the franchise would win the National League pennant in 2005 for the first time.

They met the Chicago White Sox in the World Series, but lost four games to none.

The Astros finished the 2008 season over .500 but did not make the postseason. Houston has had some baseball greats in the names of Lance Berkman, Jeff Bagwell, Craig Biggio, Jimmy Wynn, and the arms of Mike Scott, J.R. Richard, Nolan Ryan, and Roger Clemens, to name a few.
7. Which of the following never hit 500 home runs in their career?

Eckersley was a pitcher in his 24 seasons of Major League Baseball. He batted in the National League in only four seasons and hit three home runs in his career. He was the 1992 Cy Young and MVP winner with the Athletics. He went 7-1 and had 51 saves in the season. Eckersley was also the 1988 runner-up for the Cy Young to Frank Viola of the Twins. Four times in his career, he was in the top five voting for the Cy Young Award, and three times for the MVP Award.

The Hall of Fame took Dennis in 1994 along with former Milwaukee Brewer Paul Molitor. Thome played most of his career with the Indians, McCovey with the Giants, and Thomas with the White Sox.
8. "Casey At The Bat". Was this book about Casey Stengel? Who knows, but it was Stengel who managed the New York Yankees to 10 World Series appearances in 12 seasons from 1949-1960. Casey was also a player for 14 seasons in his career. Which team did he never play for?

Ironic as it is, Casey was never a Yankee until he took the helm of the team in 1949, and this was after managing the Dodgers and Braves. He began his playing career in 1912 as a Dodger, then was a Pirate in 1918. Stengel played with the Phillies before going to the Giants in 1921.

The 1923 World Series saw the Yankees win their first-ever World Series, but Casey and his Giant bat tried to prevent it by hitting two home runs in the series. He retired as a Boston Brave in 1925. He played his entire career of 1183 games in the outfield, and shared the outfield of the Dodgers with Hall of Famer Zack Wheat. Casey's ride to stardom with the Yankees went on for a lifetime, but then the bottom fell out.

He came out of retirement to take over the New York Mets, a new NL expansion team in 1962.

The Mets lost over 100 games in each of its first four seasons with Stengel at the helm. Casey was inducted into the Hall of Fame in 1966, then died in California in 1975 at the age of 85.
9. There are more players nicknamed "Lefty" in baseball history than you can count on your fingers and toes times five. One pitcher nicknamed "Lefty" won four Cy Young awards, and even threw for a Triple Crown. He began his career as a Cardinal, then made his name famous as a Phillie. Who is this Hall of Fame great?

Carlton joined the ranks of other Hall of Fame members nicknamed Lefty, in Lefty Gomez and Lefty Grove. Steve played for the St. Louis Cardinals from 1965-1971, then became a Phillie in 1972. Philadelphia was where he provided most of the damage to other National League teams until 1986.

In 1972, his season-high record was 27-10, then followed that up with a season-low of 13-20 in 1973. He was inducted into the Hall of Fame in 1994.
10. Only a few more than 20 pitchers in baseball history have won over 300 games in their careers. This is a pinacle milestone for a pitcher. Which of the following never reached that plateau?

In the 1960s, Sandy won three Cy Young awards, one MVP, threw three Triple Crowns, and won two World Series MVPs. His career record was only 165-87, but was the most dominant pitcher of the decade. He helped the Dodgers to four World Series while winning three. Along with his elbow issues in 1966, he also retired because of problems that he received from the Dodger organization for refusing to pitch on the October 5 opening day of the 1966 World Series against the Orioles. Koufax was Jewish, and opening day conflicted with Yom Kippur. Don Drysdale had to start the series, and the mix-up was blamed for throwing the pitching rotation out of kilter.

The Dodgers were skunked by the Orioles. Sandy was inducted into the Hall of Fame in his first year of eligibilty in 1972.
Source: Author Nightmare 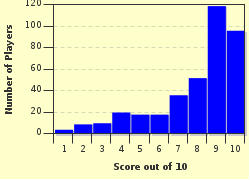