An all multiple choice quiz about some Hall of Fame greats. See if you can identify them. I hope you learn something new! :-)

Quiz Answer Key and Fun Facts
1. Before entering into the Major Leagues, this player was with the Indianapolis Clowns of the Negro Leagues. When outfielder Bobby Thomson broke his leg, this opened the door in Milwaukee for this future Hall of Fame great. Who was it?

Thomson, who was the hero of the 1951 season with the Giants with his 'shot heard around the world', was a Milwaukee Brave in 1954 when he broke his leg. 23 seasons and 755 home runs later, Hank retired in 1976. He was a 1982 Hall of Fame inductee.
2. This pitcher was the first to win the Cy Young award in both the American and National Leagues. Over 22 seasons he played for eight teams. Who was this 1991 Hall of Fame inductee?

Gaylord was passed around the leagues. He played for the Giants, Indians (where he won his first Cy in 1972), Rangers, Padres (where he won his second Cy in 1978), Yankees, Braves, Mariners, and Royals. He was famous for his spitballs. Gaylord had a brother, and Jim also played on the same Indian team with Gaylord in 1974 and 1975. Jim retired in 1975, while brother Gaylord retired in 1983.
3. From 1915-1920, which Hall of Fame pitcher won three Triple Crowns?

Unfortunately, Alexander never won a season MVP because there was none awarded from 1915-1923. Six times in his 20-season career, Pete led the league in wins and four times in ERA. Alexander went to three World Series in his career, winning three games. He was inducted into the hall in 1938.
4. This Chicago Cub outfielder was all muscle. His 18" neck and size six shoe carried him to six Hall of Fame seasons from 1926-1931. Amongst his tremendous season stats, he set NL records for his 56 home runs and 191 RBIs in 1930. Who was he?

Lewis Robert 'Hack' Wilson began his career with the New York Giants, and after three poor seasons was demoted to the minors. The Cubs bought his contract for almost peanuts, then Hack exploded for five seasons with the Cubs. His lowest output from 1926-1930 was batting .313, hitting 21 home runs, and pushing 109 RBIs across the plate. Alcohol began to be too much a part of his life after that, and his temper increased along with many fights on and off the field. Wilson retired in 1934 as a Phillie.

The hall took him in 1979.
5. This player was one of the greatest shortstops in baseball, and in 1948 won the American League MVP. He also helped the Indians to a World Series title in the season. Who was this eight-time all-star?

Eight times in the 1940s, Boudreau was in the top 10 balloting for the season MVP. He was that consistent. He didn't have the power though as he hit only 68 home runs in 15 seasons. Lou was a Hall of Fame inductee in 1970.
6. I played baseball for 16 seasons, but it was my managing that put me in the Hall of Fame. I managed the New York Giants for 31 seasons, winning 10 NL pennants. Who am I?

McGraw managed the Baltimore Orioles of the NL and AL for three seasons before picking up the reins of the Giants in 1902. His 10 NL pennants resulted in three World Series titles. He also won the NL crown in 1904, but there was no World Series held. John was inducted into the hall in 1937.
7. This Negro League player was often compared to as a black Lou Gehrig. He and fellow Hall of Famer Josh Gibson, led their Homestead Grays to dominate the Negro Leagues in the late 1930s. Who was this 1972 Hall of Fame inductee?

The others listed did not meet the ethnic background of the question. Walter Fenner "Buck" Leonard played with an array of teams in his career. Other than the Grays, he played for the Baltimore Stars, Brooklyn Royal Giants, and the Mexican, Cuban, Puerto Rico, and Venezuela leagues. Buck even played with Satchel Paige's All-Stars. Leonard died in 1997.
8. Before managing the Brooklyn Dodgers and Boston Braves, this Hall of Famer was the president, outfielder, and manager of Worcester in the Eastern League in 1925. After firing himself as an outfielder, then fired himself as manager, he then quit his presidency. After the Dodgers and Braves, he took the Yankees to many World Series. Who was he?

The others never played for the White Sox. Jacob Nelson Fox led the league in hits four times, and was second in many other categories in other seasons to show his consistency. Fox was a 12-time all-star in his 19 seasons. He retired with Houston in 1965, then died in 1975. The Hall of Fame took Nellie in 1997.
10. Like Reggie Jackson in 1993, I was inducted all by myself in 1988. I was a 21-season career Pittsburgh Pirate outfielder and first baseman. My nickname was 'Pops'. Who am I?

From 1962-1982, Stargell blessed the Pirate roster. He tied with the Cardinals' Keith Hernandez for the NL MVP in 1979. Seeing two World Series in his career, Willie won both and had a .381 combined average. The hall took Pops in 1988, then the Lord in 2001.
Source: Author Nightmare 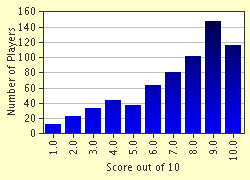