An all multiple choice quiz about some Hall of Fame greats. You have to know their born first name. In some distorted way, the pictures might also give you a clue. Good luck. :)

Quiz Answer Key and Fun Facts
1. Honus Wagner played for 21 seasons in the National League. He was one of the first five players in history to be inducted into the Hall of Fame in 1936. What is his real first name?

John Peter Wagner, nicknamed "The Flying Dutchman", began his career with the Louisville Colonels of the National League in 1897. He 'defected' amongst other Colonel players to join the Pittsburgh Pirates in 1900. From 1901-1903, the Pirates won three consecutive National League pennants. Wagner was the first player in history to have 3000 career hits.
2. Tom Seaver began his career as a New York Met in 1967. A Rookie of the Year Award and three Cy Young awards later, he found himself in the Hall of Fame in 1992. What is Tom's real first name?

George Thomas Seaver was nicknamed "Tom Terrific". Five times in his career he was a 20-game winner, with his best season in 1969, the year of the 'Miracle Mets' and went 25-7.
3. Branch Rickey was mostly noted for signing the first African-American player in modern day baseball in the name of Jackie Robinson. He was also the first to draft a Hispanic player in the name of Roberto Clemente. It was Rickey who created the Major League farm system also. What is this Hall of Famer's first name?

Nicknamed "The Mahatma", Wesley Branch Rickey played for five seasons in the early 1900s, then managed the St. Louis Browns and St. Louis Cardinals from 1913-1925. He never took his team to a better than third place finish. Baseball inducted him into the Hall of Fame in 1967.
4. Chicago Cub Hack Wilson became the second player in baseball history to hit 50 home runs in a season with his 56 in 1930. What is Hack's first name?

Lewis Robert Wilson was short, stout, and built with his powerful frame. In 1930, Hack also set a season record for RBIs with 191. That record stood firm throughout the 20th century, and only came close to being broken by Lou Gehrig in 1931 with 184 RBIs. After the 1930s, Manny Ramirez was the only player to have a distant thought about reaching Hack's record, when he had 165 in 1999.
5. Pud Galvin was a pitcher in the 1800s, and played in four different baseball leagues. After retiring in 1892, it would take baseball another 72 years to place him in the Hall of Fame. What was Galvin's first name?

James Francis Galvin debuted in the National Association's final season in 1875 with the St. Louis Brown Stockings. He also pitched in the National League, American Association, and Players League. He retired with a career record of 365-310, after having a tremendous 1884 season with the Buffalo Bisons by going 46-22.
6. In the 1920s, the Brooklyn franchise was mostly known as clowns for their continual inept play on the baseball diamond. Having very few highlights of their own, they did have Hall of Fame pitcher Dazzy Vance who threw a Triple Crown and won the National League MVP in 1924. What is Dazzy's first name?

Charles Arthur Vance made his debut in 1915 with the Pittsburgh Pirates. He became a Brooklyn Robin (later Dodgers) in 1922 and had three 20-game seasons. His 1924 season of going 28-6 was his best. The Hall of Fame took Dazzy in 1955, six years before he died.
7. Arky Vaughan was an all-star shortstop and played most of his career with the Pittsburgh Pirates. His career spanned from 1932-1948. What is this Hall of Famer's first name?

Vaughan also played with the Dodgers in four seasons, and was there to experience the arrival of Jackie Robinson in 1947. Arky was selected to the All-Star Game nine times. He was a 1985 hall inductee, 33 years after his death.
8. Some people aren't concerned with Red Schoendienst's first name because they're more focused with spelling his last name. At any rate, he was a 10-time all-star in Major League Baseball, mostly standing near second base in his 19 seasons. He made his name, however you may spell it, with the Cardinals in the 1940s and 1950s. What is his first name?

Albert Fred Schoendienst was not only a multiple MVP candidate during his playing days, but also managed the Cardinals for 14 seasons. He helmed the team to a World Series title in 1967 and won two National League pennants. He was a hall inductee in 1989.
9. Pitcher Rube Waddell was a standout in the early 1900s by being a 20-game winner four times. He threw a Triple Crown with the Philadelphia Athletics in 1905. What is this Hall of Famer's first name?

George Edward Waddell was a 20-year old rookie with the Louisville Colonels in 1897. He made his name with the Athletics, and retired as a St. Louis Brown in 1910. He was often compared to, but also overshadowed by the likes of Christy Mathewson, Ed Walsh, and Cy Young.
10. Pie Traynor was a Hall of Fame third baseman for the Pittsburgh Pirates from 1920-1937. Retiring with a .320 career average, the all-star was in the top 10 voting for the MVP 10 times. What is his first name?

Harold Joseph Traynor played in front of the Waner brothers, Paul and Lloyd who played in the Pirate outfield. Pie went to two World Series with the Pirates, winning over the Senators in 1925, then losing to the Yankees in 1927. The 1927 Yankees were named 'Murderers Row', blanking the Pirates four games to none, and scoring 23 runs against Pittsburgh's 10.
Source: Author Nightmare 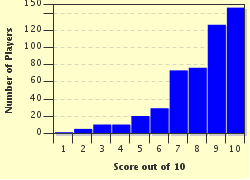