An all multiple choice quiz about some fantastic outfielders who were worthy of the baseball's Hall of Fame. This quiz is for dummies like me. I hope that you enjoy it. :-)

Quiz Answer Key and Fun Facts
1. This Hall of Fame great played for 18 seasons with the Pittsburgh Pirates but didn't retire. His career was cut short in 1972 due to a plane crash that he financed, flying aid to the country of Nicaragua and was killed. Who was this outfielder inducted into the hall in 1973?

The others are all Hall of Famers, but were Major League umpires. The number 21 was a fixture in the Pittsburgh outfield. Clemente attempted a relief mission to Nicaragua, but the shipment on the aircraft was stolen by warlords. His second attempt, totally financed with his own money, found him flying on the aircraft.

Unfortunately, due to the loading and weight and balance of the aircraft, his plane went down on December 31, 1972. He retired with exactly 3000 hits.
2. I was the first switch-hitter to hit over 500 home runs. I won three American League MVPs and a Triple Crown award. I also hit 18 World Series home runs. I was a Yankee. Who do you think that I am?

The others were all Yankees, but were not switch-hitters, outfielders, or hit 500 home runs. Mantle began his career, and entire phase of baseball with the Yankees in 1951. Hitting 13 home runs as a rookie, he found himself hitting 52 home runs in 1956, earning him the AL MVP and Triple Crown.

He won two more MVPs in 1957 and 1962. The 1961 season was one to remember as Mickey and teammate Roger Maris battled out the season for the home run crown. Injuries took its toll on Mantle, and Maris went on to hit 61 home runs in the season, breaking Babe Ruth's season record. Mickey ended up with 54 home runs in the season, playing in eight games less than Maris.
3. Of the four Hall of Fame outfielders listed, who was inducted into the hall first?

Mays was inducted into the hall in 1979, at least 20 seasons before the others listed. Mays was a loyal Giant from 1951-1972, then retired as a Met in 1973. Willie won two NL MVP awards in 1954 and 1965. This came after his Rookie of the Year award. He retired with 660 home runs.
4. I began my career as a pitcher for the Boston Red Sox, but after five seasons, I started being recognized for my bat instead. I was moved to the outfield in 1919 and set a new home run record of 29 big ones. The Yankees bought me, then I hit 54 home runs the following season. I was one of the first five hall inductees in 1936. Who am I?

The others weren't Yankees, never pitched, and weren't even born yet in 1919. Ruth, although moved to the outfield, still pitched in one game for the Yankees in 1920, going four innings and won it. It was the Babe's bat that the Yankees wanted, and he certainly came through many times.
5. Out with the old and in with the new. I was a New York Giant my entire career. I was the third player in history to hit 500 home runs. My Hall of Fame induction came in 1951, while rookie New York Giant Willie Mays looked on. Who am I?

He did help take the Giants to three World Series, and had four home runs to his credit. Mel Ott died in 1958.
6. This outfielder was inducted into baseball's Hall of Fame all by himself in 1993. He wouldn't have had it any other way. Who was this American League player who began his career, and finished it with the Athletics?

The others were Oakland As, but weren't outfielders. Nicknamed 'Mr. October' because of his 18 postseason home runs, Reggie was a rookie with the Athletics in 1967 in Kansas City, before moving with the team to Oakland the following season. Jackson also played with the Orioles, Yankees, and Angels. Reggie played in five World Series and hit 10 home runs. Three of those came in game six of the 1977 series against the Dodgers.
7. In the second round of Hall of Fame inductions in 1937, only one of the eight people inducted was an outfielder. Who was it?

The others were all inducted in the 1950s. Speaker played all his career in the American League, and mostly with Boston and Cleveland. He was the 1912 AL MVP over pitcher Ed Walsh of the White Sox. He also led the league in batting with his .386 average in 1916.

The others inducted in 1937 were Morgan Bulkeley, Ban Johnson, Nap Lajoie, Connie Mack, John McGraw, George Wright, and Cy Young.
8. This St. Louis Cardinal played every one of his 2507 games in the outfield. With the number 20 on his back, he set a new stolen base record in 1974 by stealing 118. Who was this 1985 hall inductee?

The others were never Cardinals, and didn't steal 25 total bases in their career. Lou began his career as a Chicago Cub in 1961. Brock broke Dodger Maury Wills' record set in 1962. The king of thieves, Rickey Henderson, broke Lou's record in 1982 by stealing 130. 1985 also saw Enos Slaughter, Arky Vaughan, and Hoyt Wilhelm inducted into the Hall of Fame.
9. Hank Aaron was inducted into the Hall of Fame in 1982 with 98% of the ballots. There were only two outfielders in the first 100 years of Major League baseball to be inducted with that high percentage of ballots. Which outfielder was the first one?

The others were all pitchers and none carried more than 80% of the balloting. One of the most hated players in baseball, Cobb still had the respect of those holding the ballots. Cobb was inducted in 1936 during the inaugural induction ceremonies. There were only three other players in the 100 seasons of the Major Leagues to equal or surpass the percentage of Aaron and Cobb. 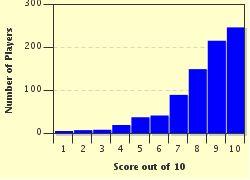