How do you make a challenging team quiz with pictures? This was designed that if you can't answer the questions, you'll still have to think out of the box for the pictures to help. I hope you have fun with it. :)

Quiz Answer Key and Fun Facts
1. Major League Baseball segmented both leagues into divisions in 1969. Which American League team never won their division in the first 25 seasons after this, then strung off five consecutive division titles to end the century with?

The Cleveland franchise was there at the beginning of the American League in 1901. After the creation of divisions in 1969, the Indians would not win their division until 1995, then won another four more consecutive. Their division crown in 1995 took them to their first World Series since 1954, but lost to the Atlanta Braves.
The picture is of Tonto National Forest in Arizona. Tonto was the loyal Indian companion of the "Lone Ranger" in the radio and television series.
2. Which of these 2011 franchises played in every single season of professional baseball since it all began in 1871?

The Braves franchise began it all in the National Association in 1871 as the Boston Red Stockings. They won four consecutive pennants from 1872-1875 before the league folded and gave way to the new National League in 1876. The Cincinnati Reds were there off and on in the early days, then a new Reds franchise emerged in 1882 in the American Association as the Cincinnati Red Stockings. That team evolved into the 2011 Cincinnati Reds franchise. The photo is of a Time Warner cable company vehicle. Time Warner merged with TBS (Turner Broadcasting System) owned by Ted Turner, who also owned the Atlanta Braves. Turner became vice-president of the Time Warner Corporation.
3. What was the name of the first professional baseball team that played their home games in the city of Baltimore?

The Canaries were in the first professional league, the National Association, but missed the first season of the league in 1871. They played from 1872-1874 before going defunct. The Baltimore Orioles by name, first appeared in 1892 in the National League.
The picture is of the old Monterey Canning Company in California, part of a major road of canneries. It had since been upgraded to modern safety and food handling specifications.
4. Which of these 2011 franchises has played in the same city for the longest amount of time?

The Cubs franchise was there for the first-ever professional baseball league in 1871 with the National Association, but the White Stockings team folded after one season, then gave it another go in the 1874 and 1875 season, but they closed their doors again. A brand new Chicago franchise joined the new National League in 1876 with the same team name of Chicago White Stockings. They won the first-ever NL pennant in 1876 with player-manager Al Spalding at the helm. Spalding was a pitcher and won 47 of Chicago's 52 wins in the season. After a few name changes, the franchise became the Cubs in 1903. The 2011 season marked the 135th season that fans in Chicago enjoyed baseball from this same franchise.
The Cardinals franchise began it all in 1882 in the American Association as the St. Louis Brown Stockings. The Pirates franchise also began in 1882 in the American Association under the name of the Pittsburgh Alleghenys. The White Sox emerged for the first time in 1901 in the new American League.
The picture displays a female in white stockings.
5. The Yankees franchise has won an astounding amount of World Series. After the franchise first moved to New York from Baltimore, how many seasons did it take for them to win their first-ever World Series?

The franchise began as the Baltimore Orioles in the American League in 1901. They moved to New York to become the New York Highlanders in 1903, then took on the Yankee name in 1913. The franchise won their first World Series in 1923 against the New York Giants of the National League. It was the third consecutive World Series matching these two teams against each other, with the Giants winning the first two.
The photo depicts a blackjack casino table, with the goal of getting 21 for players to win.
6. Which of these 2011 baseball franchises took the longest to win their first league pennant since their franchise first began?

The Phillies began it all in 1883 as the Philadelphia Quakers in the National League in 1883. Their first league crown was in 1915, 33 seasons after they began. They lost that World Series to the Red Sox.
The Dodgers began their franchise as the Brooklyn Atlantics in the American Association in 1884. After changing their name to the Grays, then the Bridegrooms, they won their first pennant in 1889 in their sixth season. The Pirates began their endeavors as the Pittsburgh Alleghenys in 1882 in the American Association. They won their first league pennant 19 seasons later as a National League member in 1901. The 2011 Reds franchise began their dreams in 1882 in the American Association. The won the league pennant in their very first season. This Reds franchise had no connection with the 1876 Cincinnati Reds team.
The sign of 'The Cheese Factory' has a relation to cream cheese, which Philadelphia Cream Cheese has a worldwide following.
7. The Atlanta Braves franchise began their franchise endeavors in the National League more than 100 years ago with what team name?

The franchise was there when the National League opened its doors in 1876 to eight teams in the new league, although being the Red Stockings in the American Association. The Red Caps finished in fourth place, watching the Chicago White Stockings (later Cubs) win the first NL pennant. The franchise stayed in Boston until 1953. In Boston, they had many team names such as the Beaneaters, Doves, Rustlers, Braves, and Bees. The franchise moved to Milwaukee 1953, then moved again to Atlanta in 1966.
The sign depicted is for a blood drive of healthy 'red' blood.
8. In the 1960s and 1970s, Major League Baseball expanded and added 10 teams to the leagues. Of these 10 teams, the Montreal Expos/Washington Nationals closed out the 2010 season, still never making a World Series appearance. Which other expansion team never made an appearance either?

The Royals made their first World Series appearance in 1980 in a loss to the Phillies, then won their first World Series in 1985 against the Cardinals. The Padres were there in the promised land in 1984, but lost to the Tigers. The Marlins won the 1997 World Series against the Indians. The Mariners began their franchise in 1997. They won their division but lost in the ALCS to the Indians in 1995. Although winning 116 games in 2001, they lost the ALCS to the Yankees.
The photo is of fishing mariners in the sea.
9. Which Major League team came ever so close to moving to Toronto in late 1976?

Prior to the existence of the Toronto Blue Jays, there were as many as three different buyers ready to purchase the Giants and move them to Canada, but the Giants were sold instead to Bob Lurie who vowed to keep the team in San Francisco. Canada settled on the Toronto Blue Jays expansion team in 1977.
The photo is of giant Gheorghe Muresan, an officially-documented NBA basketball giant who was over 7'5". Muresan played for the Washington Bullets and New Jersey Nets in the NBA.
10. Which of the following teams has never been a member of the National League?

The Grays existed for one season in 1878. The Blues were intact from 1879-1884. The Cowboys tried their hand as a team, but folded after their only season in 1886. The Newark Pepper lasted only two seasons in their franchise history. They were in the Federal League in 1914 and 1915 before the new league folded.
The picture is of the great actor Robert Redford, with amongst many classic movies, also starred in the movie, "The Great Waldo Pepper".
Source: Author Nightmare 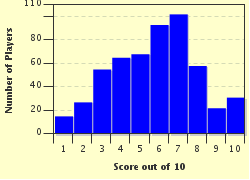