All multiple choice about the Giants baseball franchise. I hope that you enjoy it! :-)

Share on Facebook
Share on Twitter
Share by E-Mail
Author
Nightmare
Time
4 mins
Type
Multiple Choice
Quiz #
265,132
Updated
Dec 03 21
# Qns
10
Difficulty
Average
Avg Score
6 / 10
Plays
592
Awards
Top 10% Quiz
This quiz has 2 formats: you can play it as a or as shown below.
Scroll down to the bottom for the answer key.

Quiz Answer Key and Fun Facts
1. In 1957, the New York Giants moved to San Francisco to become the San Francisco Giants. What was the original name of the franchise?

The franchise came to be in 1883 under the helm of John Clapp. Their first season saw them finish 46-50, sixth place of eight teams in the National League. The team was led by catcher Buck Ewing and pitcher Mickey Welch. The Gothams would win 62 games in 1884, then with the name change of Giants, they went 85-27 in 1885 under manager Jim Mutrie.
2. In what season did the Giants win their first National League Championship?

The New York Giants won the NL pennant by nine games over the Chicago White Stockings (later Cubs). They would go on to play and exhibition "World Series" against the St. Louis Browns of the American Association, and win six games to four. All prior championship series prior to 1903 were officially considered exhibition games.
3. Upon the merge of the National and American League, creating the new Major Leagues in 1901, two Giant pitchers won 30 games in the 1904 season. Who were they?

None of the others ever played for the Giants, none were pitchers, and none played baseball in 1904. McGinnity won 35 while Mathewson won 33 in 1904. The team went 106-47 in manager John McGraw's second season at the helm. This was the first time the franchise would win 100 games.

Unfortunately, there was no World Series in 1904. Mathewson would go on to win the Triple Crown in 1905 and 1908, then be inducted into the Hall of Fame in the first round of inductees in 1936. McGinnity would join the hall in 1946.
4. In which decade did the Giants and Yankees first meet in a World Series?

In three consecutive World Series, the Giants met the Yankees beginning in 1921 with the Giants being victorious, five games to three. It was worse for pitcher Bob Shawkey, Babe Ruth and company in 1922, and they lost four games to none with one tie.

In 1923, the Yankees finally had their revenge with a four games to two win for their first World Series crown. The Yankees had rookie Lou Gehrigin 1923, but he did not play in the series.
5. Shortly after the 31-season stretch of manager John McGraw ended, which new Giant manager took the team to three World Series from 1932-1941?

The others were all Giant managers, but didn't take the reins of the team until the 1960s. Terry and the Giants won the World Series in 1933 against the Washington Senators, then lost the series to the Yankees in 1936 and 1937. The Yankees rostered some baseball greats in the names of Joe DiMaggio, Bill Dickey, Lou Gehrig, Tony Lazzeri, and pitchers Red Ruffing and Lefty Gomez. Babe Ruth left the Yankees after the 1934 season.
6. Who was the first Giant to hit 500 career home runs?

Only Mays and Ott hit 500 home runs for the Giants. Mays hit 646 before being traded to the Mets in 1972. Ott played for the Giants from 1926-1947, and retired with 511 as a career Giant outfielder. Ott was the second player in history behind Babe Ruth to hit 500 home runs. Ott's nickname was 'Master Melvin', and he was inducted into the hall in 1951, Willie Mays' rookie season. Mel died in 1958.
7. In 1958, the new San Francisco Giants appeared in their first season on the West Coast. They played in Seals Stadium for two seasons before moving into which ballpark, which the team would use for the rest of the century?

Although the Giants sold the naming rights to 3Com Corporation in 1995, it was still the same ballpark. The Beatles played their final concert ever in the park in 1966. In 2000, the Giants moved into a new stadium in the name of PacBell Park.
8. Which year did the San Francisco Giants play in the famous "Earthquake World Series"?

The 1989 series pitted the Athletics against the Giants for a Bay Area World Series. During game three on October 17, Mother Nature released a 7.0+ quake in the bay area. Game three was suspended and the series continued 10 days later with a 13-7 Oakland win.

The A's nailed the coffin shut with a 9-6 series-ending win. Athletic pitcher Dave Stewart took the MVP honors. Except for Giant pitchers Scott Garrelts and Kelly Downs, nobody else could muster more than two Oakland strikeouts.
9. Who was the first pitcher to win the franchise's first Cy Young award?

The Cy Young award began in 1956, and McCormick was the only Giant pitcher to win the Cy Young in the first 100 years of Major League baseball. He won it in 1967, the first season that the award was split to one winner in each league. Jim Lonborg of the Red Sox won it for the American League. The Giants finished 10.5 games back of the Cardinals in 1967.
10. The Rookie of the Year award began in the Major Leagues in 1947, with Dodger great Jackie Robinson winning the inaugural award. How many Giants won the award to close out the 20th century?

Willie Mays won the team's first rookie award in 1951. He was followed by Orlando Cepeda in 1958, Willie McCovey in 1959, Gary Matthews in 1973, then pitcher John Montefusco in 1975. Showing a weak farm system, the Giants went dry for the rest of the century. Robby Thompson was the only Giant to finish in the top three of the remaining seasons, and he did this in 1986 as the runner-up to Todd Worrell of the Cardinals.
Source: Author Nightmare 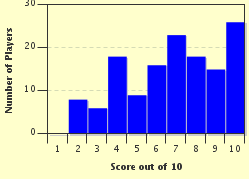