Quiz Answer Key and Fun Facts
1. In 1981 when Grave Digger was just a mud bogger, what was its primary color?

Grave Digger was originally a mud bogger and was converted to a monster truck in 1986.
2. Who was the original driver of Grave Digger?

Dennis Anderson built and drove the original Grave Digger mud bogger as well as the first converted monster truck.
3. In 1987, which tour did Grave Digger primarily compete on in its first year of competition?

Grave Digger began competing in 1987 on the TNT Motorsports tour against trucks such as Big Foot.
4. What color are Grave Digger's trademark glowing headlights?

When Grave Digger trucks sit idle, their headlights are off but when they start up and enter competition, they glow bright menacing red in color.
5. In 2007, Grave Diggers home was Detroit Michigan?

Grave Digger's home was in Kill Devil Hills, North Carolina.
6. In 1999, Dennis Anderson won his first Monster Jam championship. What was this for?

Fred Bumann came up with the orginal famous paint scheme for Grave Digger in 1985 at his shop in Norfolk Virgina.
8. In 2003, Grave Digger won its third Monster Jam points championship. Who was the driver?

Clear channel, which in turn became what was later known as Live Nation, bought the Grave Digger team in 1998, and moved all its monster truck operations into the Grave Digger shop.
10. In what city did Grave Digger first beat Big Foot in competition?

Grave Digger beat Big Foot for the first time in 1987. The show was taped and aired on ESPN, and was considered Grave Diggers first major win.
Source: Author vertigo315 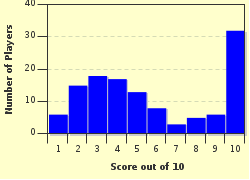 
Other Destinations
Explore Other Quizzes by vertigo315