Quiz Answer Key and Fun Facts
1. Who was the first ever World Finals racing champion in 2000?

Tom Meents won it by beating Lyle, and at that time Meents was in Goldberg.
2. Who was the first ever World Finals freesytle champion in 2000?

At the end of the 2 minutes, Dennis had a perferct 40 and a rolled over truck at the end of freesytle.
3. What truck did Lyle Hancock drive in the 2001 season?

When he debuted this truck, he won both the racing and tied for first place in Houston, Texas, with Dennis Anderson and Tom Meents.
4. What other truck debuted at Houston with Blue Thunder in 2001?

Grave Digger #14 did not do as well as Blue Thunder and Lyle Hancock did, but he did manage to tie for first place in the freesytle with Lyle and Tom.
5. Why didn't Dennis Anderson win the first event of the Monster Jam 2002 season?

He blew the tire in the semi-final round versus Tom Meents in the Team Meents truck, and blew the right rear tire.
6. What was the name of the truck that Pablo Huffaker drove in the 2007 World Finals?

He changed the name on his Blacksmith truck to give him a new look for the World Finals in 2007.
7. There was only one truck that was a two-wheeled monster truck in the 2005 through the 2007 seasons. Which truck is it?

Cyborg was made in 1995, and was the only two-wheeled monster truck in competition.
8. Is the Pastrana 199 monster truck named after a motorcross champion?

Travis Pastrana is a motorcross champion. He named it after himself and he also owns the truck and was a Dodge Ram in 2006, but in 2007 was turned into a Ford F-150 body sytle with motorcross designs on the truck.
9. Who filled in as the the driver of the Grace Digger #20 while Dennis Anderson had his injured shoulder in 2007?

Adam was chosen to drive his father's truck until Dennis's shoulder healed, and was also Grave Digger's 25th anniversary which was the 2007 Monster Jam season.
10. What was the color of the Grave Digger in the 2007 World Finals?

He drove a chrome colored Grave Digger to the World Finals in 2007 to celebrate his and the Grave Digger's 25th anniversary. At the end of the freesytle competition, they had 5 Grave Diggers freesytling at the same time.
Source: Author bb4776 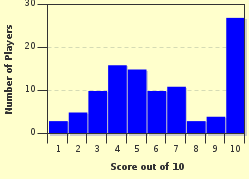 
Other Destinations
Explore Other Quizzes by bb4776