Come join me on a voyage through the world of snooker with questions on the rules of the game, players, and competitions. Enjoy!

Quiz Answer Key and Fun Facts
1. You enter the empty theatre ahead of a major snooker competition in order to get some early practise. You pick up your cue and you get out your set of 22 balls and begin to arrange them on the table. You place a triangle on the felt (more correctly baize), but what colour balls are meant to be arranged in this shape?

15 of the 22 snooker balls are red in colour and at the start of every frame the reds are arranged in a triangle ready for the break. A player takes a cue ball (white ball) and places it in a D-shaped portion of the table which is clearly outlined. For a legal break to occur the cue ball must collide with one or more of the red balls and the game begins.
2. You are in the audience watching a very tight frame between two professional snooker players. You notice that the last red ball has been potted and the six coloured balls remain on the table. For the player at the table to go ahead in points he needs to pot a ball worth five points or more. Which of the following ball colours will not put him immediately in the lead?

The points system in snooker is based on the colour of the ball potted and at the start of a frame the balls of certain colours are placed in specific positions on the table. A red ball is worth one point, yellow worth two, green worth three, pot a brown ball for four points, sink a blue ball for five, and perfect the pink for six points and demolish the black for seven.

In this example the player at the table is four points behind and to go in front by only potting one coloured ball, the value of that ball would have to be worth five or more. The yellow would thus not provide enough points as it only has a value of two.
3. You are sitting in the audience watching a compelling frame of snooker and your favourite player has just achieved a 147 break! A standing ovation from the crowd is seen as this break is an extraordinary achievement illustrating technical brilliance. If a player is to make a 147 break, without the use of free balls, what colour ball must be potted after every red ball?

This really doesn't happen all that often and even less so when the pressures of large audiences and TV cameras are thrown into the mix. If a player was to achieve a 147 break (the maximum in the sport) then a red ball followed by a black ball would have to be potted and this would have to be done fifteen times without missing once! Add to that then the pressure of clearing the table (yellow, green, brown, blue, pink and black) as the pressure intensifies.

It is no surprise that it isn't done very often and if it is attained on TV then it could turn out to be a very lucrative achievement indeed!
4. Other than the cue that snooker players mostly use to complete a frame of the sport, there exists some interesting equipment. What is the name given to the piece of equipment that is in many respects a rest but contains an arch to provide extra height?

The spider is often used instead of a rest (a cue with a cross-shaped head) in situations where the cue ball is close to a red or coloured ball and the player needs to reach over the red or coloured ball to hit the cue ball without fouling. The player can use their hand to mimic the arch of the spider but this depends on the area of the table available for their hand to rest. If the area of the table is congested then a spider would be more appropriate.
5. The world of snooker was dominated by one player throughout the 1990s. In this highly technical game where pin-point accuracy and a steady nerve is essential, this player excelled to the dizzy heights of sporting success. What is the name of this Scottish player who was crowned World Snooker Champion seven times in the period 1990 to 1999?

Hailing from Edinburgh, Scotland, Stephen Hendry would burst on to the professional snooker scene at the age of 16, an age so frighteningly young for an individual that would be ranked number four in the world just three years after leaving amateur snooker behind.

After turning professional in 1985 he soon began winning tournaments and by 1990 he had already made it to the status of World Champion. Who would know then that by 1999, the millenium approaching, Mr Hendry would win the World Snooker Championship another six times?
6. The 2000s in snooker were a lot more competitive than was the case in the 1990s due to the decline in form of one of the sport's greatest players. In the period 2000-2009, which of the following players won the most World Snooker Championships?

Certainly one of the quickest players to grace the snooker table, Ronnie "The Rocket" O'Sullivan would prove to be one of the more memorable players in the snooker world. Winning the World Snooker Championship three times in the period 2000-2009 with wins in 2001, 2004 and 2008, O'Sullivan's brilliance couldn't be denied. Ronnie's success has meant his personal life has also been brought into the spotlight. Both of his parents have spent time in jail, his mother for under a year and his father was sentenced to eighteen years incarceration.

Despite such family issues and documented depression, O'Sullivan continued to be an excellent snooker player even if a little controversial from time to time.
7. Whilst only registering a comparatively modest career, this individual would become well known in the snooker world for his comedic style at the table and later for becoming a commentator at the BBC. What is the name of this player who made it to the semi-final of the World Snooker Championship in 1979 and who won the UK Championship the same year?

John Virgo became well known for his trick shots and this was brought to the attention of the mainstream public when he was a part of the on-screen crew of the TV show 'Big Break'. This quiz show that was originally broadcast across the United Kingdom from 1991 to 2002 was based on snooker! At one point in the show, one of the losing contestants would attempt to successfully play a trick shot that was effortlessly demonstrated by John Virgo.
8. Ding Junhui is an example of a player from outside the Commenwealth who has become a professional snooker player. This is a good step for snooker as by increasing the number of countries represented, the sport receives a broader appeal. By the Beijing Olympics of 2008, snooker was not classified as an Olympic sport but was the event ever included in the Asian Games.

Snooker is included in the group of cue sports which were first accepted as part of the Asian Games in Bangkok, 1998. Not only was there an event for individual snooker players in Bangkok (as well as in subsequent Asian Games) but there existed the chance to play as part of a partnership in the snooker doubles. Ding Junhui, representing China, made a sweep of the gold medals at the 2006 Asian Games in Doha, Qatar taking first place in the singles, doubles and team snooker events.
9. Snooker, more than most sports, seems to be of a rather conservative nature with players wearing bow ties and the crowd remaining, for the most part, silent. With this ostensibly conservative nature in mind, has the World Snooker Championship final ever been officiated by a female?

Most people who follow televised snooker will have noticed the female presence in the background. If you noticed then the chances are it was Michaela Tabb. After starting out as a pool player and later a pool referee she was asked to become involved in officiating professional snooker matches.

In 2009, this respected member of the snooker community became the first ever female to officiate a World Championship final, a fact I'm sure she is proud of considering the tournament has been running since 1927.
10. The World Snooker Championship is the most important event in this particular sport's annual calendar. With prestige and a lot of money to be won it is the tournament that all snooker players aspire to. In 1977, this event was moved to a venue in the English city Sheffield, but for what was this venue originally built?

In 1977, the World Snooker Championship was moved to the Crucible Theatre, Sheffield. Due to the high profile nature of snooker throughout the 1980s and 1990s, the Crucible Theatre was later more commonly associated with this table game than it is for theatrical stage displays and musicals.
Source: Author jonnowales 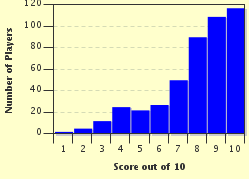