Which Famous Cricketer Am I? Trivia Quiz

There have been tons of players who have been considered champions. How well do you know them?

In this match Australia were bowled all out for 245 runs with Charles Bannerman making 165 before retiring hurt. Australia won this match by 45 runs. 100 years later another match was played between these two teams with Australia winning by exactly 45 runs again. This was known as the Centenary Test.
2. I was named one of the three W's. I had an excellent average of 58.61 with a high score of 207. I once scored 779 runs in 7 innings in a series against India. Which West Indian am I?

The other two 'Ws' were Sir Clyde Walcott and Sir Frank Worrell. These three players were all born seventeen months apart. Sir Everton Weekes made his debut against England in 1947-48 but was then dropped to make way for George Headley. He then came back when Headley retired.

Then on a tour of India he scored an amazing 779 runs in 7 innings which included a record at the time of 5 hundreds in successive Tests.
3. I was named man of the match in the very first ODI match played between Australia and England. I played 77 test matches at an average of 43.54 with an excellent high score of 310*. Which famous English batsman am I?

In 1971 the first ever ODI match was played between Australia and England as a replacement to the washed-out Melbourne Test. Although Edrich was named 'Man of the Match', Australia were the victors.
4. I once bowled 137 balls before a run was conceded. I played 37 tests for South Africa at a reasonable bowling average of 25.91 once I achieved bowling figures of 9/113. Which famous South African bowler am I?

Hugh Tayfield made his debut against Australia in 1949 and instantly made a statement. He retired with more wickets per Test match than Jim Laker and Lance Gibbs. Hugh Tayfield was exceptionally accurate and could bowl all day without wavering. Tayfield bowling to Trevor Goddard in the 1950s sent down an amazing 137 deliveries which Goddard was unable to score from.
5. I am one of the greatest bowlers who have ever represented Australia in a Test match. I played 70 Test matches and took 355 Test wickets. I had a bowling average of 23.92 and was involved in the infamous bouncer war. Which lightning fast bowler am I?

Dennis Keith Lillee was involved in the aluminum bat incident. He walked out to bat one day with an aluminum bat and after two balls the players could hear a very unusual sound. The English captain, Mike Brearley, complained to the umpires, and it was eventually decided that Lillee could not use the bat.
6. I was one of the four man pace attack for the West Indies that played together in the 1980s. I took 259 wickets at an excellent average of 20.97. I was not much of a batsman but I was known to hit big sixes. Which great West Indian am I?

Joel Garner's nickname was 'Big Bird' because he was so tall and he would use his height when he bowled a cricket ball. He played 58 test matches taking 259 wickets at an economy rate of 2.47 and a bowling strike rate of 50.8. He was also named Wisden Cricketer of the Year in 1980.
7. I played 54 test matches for Australia at a batting average of 22.65 but the amazing fact about me is that I had nearly had as any stumpings as catches behind the stumps when I retired. Which famous wicket keeper am I?

Bert Oldfield kept to Clarrie Grimmett for most of his cricketing career and took 130 dismissals. He played Test cricket for 17 years of which most of the years were affected by wars. When he retired he finished with 52 stumpings and 78 catches and would regularly achieve 4 stumpings in a Test match.
8. I am one of the great all-rounders ever to have played the game. I have scored over 10,000 runs in both forms of the game and I have also taken over 200 wickets in both forms of the game. Which famous all-rounder am I?

Jacques Kallis made his debut for South Africa on December 14, 1995. Since then he has made a huge statement. He has played every type of cricket there is to be played averaging over 50 in test cricket with a bowling average of just over 30.
9. I played for the West Indies and scored over 8000 test runs at an average of 57.78. I was also handy bowler picking up 235 test scalps at a reasonable average of 34.03. I also played one ODI but I was unsuccessful getting out for a duck. Which great West Indian all-rounder am I?

When Sir Garfield Sobers scored his first ever Test century he went on to make 365*. He was regarded as one of the greatest all rounders ever to have played the game. He could bowl fast, medium pace and spin. He could also change his batting from defensive to attacking. He once hit six sixes off Malcolm Nash from Glamorgan.
10. I have played over 100 test matches for Sri Lanka, taking over 600 wickets and I have been called many times for chucking. Which famous Sri Lankan bowler am I?

Muttiah Muralitharan was called 7 times within 3 overs in the 1995 Boxing Day test. He was cleared of his action and has taken over 1000 wickets for Sri Lanka. Murali has taken many 9 wickets hauls and has taken 5 wickets in an innings more than 66 times.
Source: Author swingking2 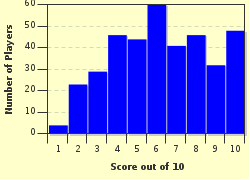 
Other Destinations
Explore Other Quizzes by swingking2