Back to the 80s! Trivia Quiz

This is a quiz about some of the TV programs I watched as a child. Most of them were shown during the 80s. (Note: Non-Brits may find this tough!)

Quiz Answer Key and Fun Facts
1. "We're off to Button Moon_____." What comes next in this theme tune?

The main characters in 'Button Moon' were made out of old kitchen equipment. There was Mr and Mrs Spoon and their daughter Tina, who all had wooden spoons for arms and little Egbert who was made out of an egg cup.
2. What's the name of Dangermouse's sidekick?

She-ra is He-man's twin sister, Raphael is one of the 'Teenage Mutant Ninja Turtles' and Denver is the star of 'Denver the Last Dinosaur.'
3. What happens to Eric Wimp if he eats a banana?


Answer: He turns into a super hero

Eric is the star of the show 'Bananaman.' Bananaman's allies were a crow and a policeman called Chief O'Reilly.
4. On which show would you find the characters Texas Pete, Spottyman and Bulk?

'Superted' is the story of an ordinary bear who got thrown away when they found something wrong with him at the factory. Spottyman is Superted's friend. He's the one that brought him to life right at the very beginning of the series, while Texas Pete and Bulk are two of the bad guys.
5. Count Duckula was originally a bad guy on 'Dangermouse.'

The vegetarian vampire duck later went on to have his own show. If the Count is killed he can be reincarnated, but only once a century. During the last reincarnation something went wrong - Ketchup was used instead of blood during the ceremony... and that's why Count Duckula is a vegetarian.
6. Where do the 'Poddington Peas' live?


Answer: At the bottom of the garden

"Down at the bottom of the garden, among the birds and the bees, a little lot of little people, they call the Poddington Peas." A very catchy theme tune!

Thundera is where the Thundercats originally came from but they had to leave because it blew up. They named their new planet 'Third Earth.' 'Stop It' and 'Tidy Up' from the show of the same name live in 'The Land of Do As You're Told.'
7. Why shouldn't you go near the Trapdoor?


Answer: Because there's something down there

(Part of the theme tune to the show 'Trapdoor')
8. What are Alvin, Simon and Theodore?

Alvin, Simon and Theodore were the stars of "Alvin and the Chipmunks." The three brothers have their own band and live with their human dad and songwriter Dave Seville.
9. "Your letter was only the start of it and now you're part of it" is the beginning of the theme tune for which TV show?

'Jim'll Fix It' was presented by ex radio DJ Sir Jimmy Saville. Children would write in to the show asking Jim to grant their wishes; anything from meeting their favourite pop group to interviewing the Prime Minister. Jim would then use his influence to get the kids what they wanted, then they'd get a 'Jim'll Fix It' badge.
10. Which saturday morning kids TV show featured 'Gordon the Gopher' and 'Edd the Duck'?

'Going Live' was hosted by Philip Schofield from 1987 - 1993.He was assisted by Gordon the Gopher (a squeaky puppet who looked like a sock in a jumper) and Edd the Duck. In 1993 'Going Live' became 'Live and Kicking.'
Source: Author beee 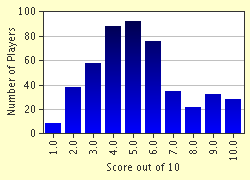 
Other Destinations
Explore Other Quizzes by beee