This quiz is suitable for die hard "Grey's Anatomy" fans ONLY! Let's see how well you know what happens within the walls of Seattle Grace...

Adele is never mentioned or seen until season 2 when Richard's secretary informs him that she has mentioned divorce over the phone if he doesn't make it home for Thanksgiving dinner.
2. Later on in the first season, Derek finally gives in to Meredith's ultimatum "I want facts and until I get them my pants are staying on!" One piece of information he gives her about himself is his favourite flavour of ice-cream. What is it?

Derek also tells Meredith his favourite colour is Blue. Not light Blue, Indigo!
3. In season 2, following Addison's arrival on the scene, Derek and Meredith decide to become "friends" and Derek suggests that they walk their dog "Doc" on Tiger mountain trail. How often does Derek say he does this?


Answer: Every other morning

He walks Doc every other Morning as does Addison. Meredith eventually agrees to meet him and this begins to lead them down the path of being more than "just friends" again.
4. At the end of season 2, a group of restaurant workers end up in Seattle Grace with bullet wounds due to a crazed ex-employee who was trying to kill their boss. What was the name of the gunner?

Petey, though never actually seen in the episode, comes back at the end to attempt to kill their boss again at the hospital. Unfortunately he ends up shooting Burke who was rushing back to the hospital to check on Denny Duquette.
5. In season 2, Addison is feeling neglected by Derek and lights up at the attentions of a patient's husband who thinks she looks like which famous French actress?

In response to this Bailey mutters "and I've been told I look like Halle Berry" Classic Bailey!
6. Who was the second "Grey's" character to fail a board's exam to qualify him/her to continue the progression of their medical career?

Alex failed his board's exam the first time round during his Intern year. This was shortly after Izzie found him cheating on her with Olivia the nurse. The rest of the gang helped him to study by acting as patients and describing their symptoms, even a disgruntled Izzie!
7. When Meredith starts to date again after Derek dumps her for Addison, the vet, Finn, tells her about his past to show her she is not the only one who is "scary and damaged". Which of these facts does he NOT tell Meredith?


Answer: His wife died of cancer

Finn then reveals that Meredith is the first woman he has met since his wife's passing whom he can see himself having a future with (ahhhh!)
8. In season 2, Burke and Karev travel by helicopter to Mercy West to collect Denny's new heart. UNOS tells Doctor Burke that the heart technically belongs to Dr Hahn's patient as he was admitted to the programme before Denny. How long before Denny was Dr Hahn's patient admitted?

Izzie is outraged to find out that Denny has lost the heart by only 17 seconds and tells Denny he deserves the heart just as much as the other guy. This leads on to the "who cut the LVAD wire" saga!
9. Among the many guest stars of "Grey's", we see Christina Ricci star in season 2 as the new paramedic Hannah Davies. When she freaks out after being told she has to keep her hand in the patient to hold the unstable bomb in place, she says she is too young to die and isn't even supposed to be there. How old does she say she is?

Hannah then runs from the OR leaving Meredith with her hand in the patient holding the unexploded bomb!
10. After George and Meredith sleep together and George has to move out, he ends up staying with Cristina and Burke. How does Cristina finally get George to leave the apartment?


Answer: She walks around naked

Cristina goes to the fridge naked while Burke and George are sat having breakfast. She calls this "going back to basics"
Source: Author LizinLondon 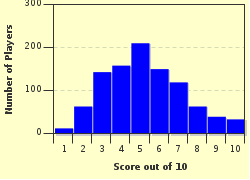 
Other Destinations
Explore Other Quizzes by LizinLondon