They Said It In The 80s Trivia Quiz

This is the second in a series of quizzes on television programs that added words and phrases to everyday American language.

Quiz Answer Key and Fun Facts
1. 1980: The top rated show for this year often ended with one of the series regulars voicing a complaint that began with: "Did you ever wonder...". Which show was this?

Andy Rooney began his segment "A Few Minutes With Andy Rooney" in 1978. It replaced Shana Alexander's and James Kilpatrick's "Point/Counterpoint" which was the basis for a famous Saturday Night Live spoof in which Dan Aykroyd yelled at Jane Curtain, "Jane, you ignorant slut."
2. 1981: Which television journalist ended the CBS Evening News with his signature phrase "and that's the way it is" for the last time on March 6, 1981?

"Uncle Walter" has been called "America's most trusted man." After he left the CBS News in 1981 he later said he may have retired too soon. He was replaced by Dan Rather, who himself was replaced in 2006 by Katie Couric.
3. 1982: Though not a popular saying, this Eddie Murphy character on Saturday Night Live taught us a new way to pronounce the name of a Lionel Richie hit. Which Murphy character gave the world the song "Unce, Tice, Fee Tines a Mady"?

During the 1981-82 season of 'SNL' Murphy's character Buckwheat premiered in a sketch promoting his first album "Buh-Weet Sings." He opened the skit with "Hi, Ah'm Buh-Weet. Amembah me?"
4. 1983: Which sitcom, the Emmy winner for best comedy of 1983, featured one of characters saying in every episode: "Hi, I'm Larry, this is my brother Darryl, and this is my other brother Darryl"?

The "Newhart" finale was one of television's most watched episodes. In it, Bob Newhart's character, Dick Louden, was hit in the head with a golf ball and when he came to he was in bed with Suzanne Pleshette, his wife on his previous hit sitcom "The Bob Newhart Show." His seven years running an inn in rural Vermont had all been a bad dream.
5. 1984: The cop show classic "Hill Street Blues" won its fourth consecutive Emmy for best drama this year. Which character uttered the enduring phrase from the show, "Let's be careful out there"?

Esterhaus, played by veteran actor Michael Conrad, said "Let's be careful out there" at the end of the precinct's roll call. Conrad, who won a best supporting actor Emmy for his role as Esterhaus, died of cancer in 1983. 'Hill Street Blues' won a total of 98 Emmy nominations, a record at the time.
6. 1985: On which show, which ended its run in 1985, did the main characters live in a "dee-luxe apartment in the sky"?

"The Jeffersons"' theme song 'Movin on Up' was co-written by "Good Times" actress Ja'net DuBois, who also sang it, and Jeff Barry. George and Louise ('Weezy') Jefferson were dry cleaners who occupied a penthouse apartment in New York City.
7. 1986: The last episode of this action show aired in December, 1986 after contributing the phrase "I pity the fool" to the vernacular. Which was it?

'The A-Team' premiered in the fall of 1983. Mr. T (born Laurence Tureaud), who said "I pity the fool", became famous for several things, including wearing ropes of gold chains around his neck.
8. 1987: Which Top 10 show from this year had one of the characters begin stories (which usually involved her youth in Sicily) with the words "Picture this"?

"The Golden Girls" pioneered the idea that middle-aged women still had romantic lives, a novel concept in the 1980s. All of the actresses from the show (Bea Arthur, Betty White, Rue McClanahan and Estelle Getty) won at least one Emmy Award during its' 7 year run.

The stories told by the character Sophia (Getty) most often revolved around her love life back in the old country. She was engaged to or romantically linked with Guido Spirelli, who she dumped at the altar, Augustine Bagatelli, and Giuseppe Mangiacavallo (played by acting veteran Howard Duff) who left HER at the altar. She eventually married Salvador Petrillo, the father of daughter Dorothy, the character made famous by Bea Arthur.
9. 1988: During the presidential race of 1988 one of the candidates turned to his opponent during a nationally televised debate and uttered a phrase that is now a part of the political vocabulary to imply someone thinks too highly of themselves. Who said the famous words "Senator, you're no Jack Kennedy"?

Democratic vice-presidential candidate Senator Lloyd Bentsen issued this snappy retort to Senator Dan Quayle when his opponent compared himself to the former president. The full quote reads: "Senator, I served with Jack Kennedy. I knew Jack Kennedy. Jack Kennedy was a friend of mine. Senator, you're no Jack Kennedy."

Another clue to the correct answer was that Bentsen and Quayle were the only senators on either ticket; Bush was the vice-president and Dukakis the governor of Massachusetts.
10. 1989: Which character from the Emmy winner for best comedy of the '89-90 season was famous for witty responses when asked how he/she was doing, such as: "It's a dog eat dog world and I'm wearing Milk Bone underwear"?

Some other well-known retorts Norm offered include these:

"What's shaking, Norm?"
"All four cheeks and a couple of chins." 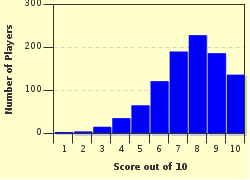 
Other Destinations
Explore Other Quizzes by brewster76