Everybody knows the video game hero Mario, but what do you know about his family member Wario?

Quiz Answer Key and Fun Facts
1. In which of the following Nintendo games is the character Wario first featured?

"Wrecking Crew" was a 1985 Nintendo game designed by Yoshio Sakamoto. The action puzzle game was released exclusively for the Nintendo Entertainment System. Armed with a hammer, Mario or Luigi attempt to destroy a number of objects throughout one of a hundred different levels. Mario attempts to destroy walls, ladders and pillars and avoid bombs, indestructible barrels and various enemies. One of these enemies is the construction foreman named Spike, the forerunner of the later character Wario.
2. In "Mario Kart 7", what color is Wario's hat?

Wario appears as a heavy unlockable driver in "Mario Kart 7" (2011). In "Mario Kart 8" (2014), the Wario character has not lost any weight and features as one of the starting drivers. His trademark hat is a big yellow cap with a purple W on it.
3. The character name Wario is a combination of "Mario" and the Japanese word "Warui" which interestingly is translated as what character trait consistent with the Wario character?

Wario makes an appearance in many games within the "Mario" franchise. He is usually featured as a very large, greedy, and bad-tempered rival to Mario. He is predominantly clad in his purple overalls and yellow cap and can often be found trying to make poor Mario's life difficult.
4. In which game is the Wario character depicted as a baby prone to tantrums?

Wario appears as a baby in "Yoshi's Island" DS game (2006). This game also sees the debut of Baby Donkey Kong. Baby Wario is kidnapped by Kamek along with other children from the Mushroom Kingdom. Yoshi discovers Wario crying in an undersea cave. Wario is a very heavy baby and difficult for Yoshi to carry across large gaps.

However, he has a cool magnet that can attract coins. During the game, baby Wario joins forces with Yoshi to beat Bowser and rescue the other children.
5. In which of the "Smash Brothers" games does Wario appear as a playable character?

Based upon information in the "Wario World" Instruction Manual, the Wario character weighs over 300 pounds. He has a large pink nose and a square mouth with a cleft chin. Wario is one of the widest of all the Mario world characters and he is taller than Mario. Wario has styled sideburns and his most unique physical trait is of course the stylish zigzag moustache.
7. In the 2004 "Mario Power Tennis" game for the Nintendo GameCube, who is Wario's double's partner at the opening of the game?

Wario is one of three characters that have special power skill types in "Mario Power Tennis" (the other two being Bowser and Donkey Kong. Wario's offensive power shot is the thunder cast shot. In the opening of the game Wario is partnering Waluigi against Mario and Luigi.

The Mario Brothers win and their opponents team up with Bowser to plan a way to beat Mario & Luigi in the tournament finals at the Peach Dome. Waluigi and Wario demonstrate good chemistry in other Mario franchise games including "Mario Superstar Baseball" (2005).
8. Which of the following game titles marked Wario's first starring appearance on a home game console?

"Wario World" was released in 2003 as a platformer game for the Nintendo Gamecube. The game was a big success selling over 250,000 copies in the United States and more than 140,000 copies in Japan. The game is comprised of four different worlds each with two levels.

In order to progress the player must beat the boss, collect eight golden statue pieces and return eight of Wario's treasures back to him. One of the only complaints for the game was that it was a little too short.
9. In 1992, "Super Mario Land 2: 6 Golden Coins" was released for the Nintendo Game Boy. To defeat the game Mario must beat Wario. Which of the following transformations does NOT show up in the final level?

"Super Mario Land 2: 6 Golden Coins" was released for the Game Boy in 1992 and for the Nintendo 3DS Virtual Console in 2011. In the game, Wario takes over Mario's castle home, takes control of the citizens and scatters six golden coins across the land. Mario has to reclaim those golden coins before battling Wario at his castle.

In the final battle, consisting of three stages, Mario must beat stomping Wario, Rabbit Wario, and Fire Wario. Once defeated Wario transforms into Tiny Wario and runs away as Mario wins back his castle.
10. One of my all-time favorite Wario super abilities is the "gas mask" where he has the ability to emit flatulence causing opponents controls to be reversed in which of the following sport games?

Wario appears as a captain in the 2005 Nintendo Gamecube "Super Mario Strikers." Wario wears his customary yellow and purple colors and has a super strike belly blast. In 2007 its sequel "Mario Strikers Charged" was released for the Wii console. It is in this game that he can unleash his deadly flatulence.
Source: Author coachpauly 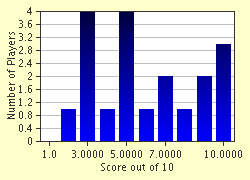