The North Atlantic, or "The Pond" is one of the most travelled and most dangerous waterways in the world. From bad navigation to collisions, many ships have met an untimely end. "Iceberg right ahead" and let's go!

Quiz Answer Key and Fun Facts
1. Built in Ireland, brand-new and on its maiden voyage, this famous White Star line passenger liner collided with an iceberg and sank in 1912. What is its name?

Over 2,200 people (passengers and crew) were on the Titanic when it struck the iceberg. Of these, around 1500 are known to have died (over 800 passengers and just under 700 crew).
2. Even modern technology can go wrong. A passenger ship for the Italian Line, she was fast, radar-equipped, fog-bound and doomed. After colliding with the Motor Vessel Stockholm, she capsized and sank off Nantucket in 1956. Which ship was this?

Technology can blind. Even the most modern radar is only as good as the mariner interpreting it.
3. In 1862 this revolutionary little ironclad battled the CSS Virginia, but was lost in a storm in the "Graveyard of the Atlantic" on New Year's Eve. Built in New York and designed by a Swedish inventor, what was its name?

A brilliant technical design by John Ericsson, but seaworthiness is still kind of important in a vessel.
4. Known as "The Ship of Gold", this American vessel sailed from Central America for New York City in 1857. She was caught by a hurricane off the Carolinas and sank with the loss of 400 people and 30,000 pounds of gold. Which ship was this?

So great was the economic loss of the gold that it led in part to an economic crisis in the United States.
5. Lost in the "Perfect Storm" of 1991, the tragic story of this Gloucester, Massachusetts fishing vessel was made into a movie of the same name. What was the boat's name?

Most of the movie is fiction since there were no survivors from the Andrea Gail. To quote another movie, "Dead men tell no tales".
6. Although not sunk herself, this massive ocean liner collided with the escort vessel HMS Curacao in 1942 off the coast of Ireland. The Curacao was cut in two and over 200 of her crew were lost. What was the name of this Scottish built, English liner?

The fact of this collision was kept secret throughout the Second World War. Nothing could be said to endanger the "Queens" and their important service transporting troops across the Atlantic.
7. This American Paddle-wheel passenger steamer sank off Newfoundland, Canada in 1854 after colliding with another ship. Over 400 were lost, but most shocking was that no women or children survived. Named after the geographic area just to the north of where she sank, her loss diminished American influence on the Atlantic allowing a young upstart named Cunard to surge ahead.

Her sister ship was lost two years later.
8. This Canadian trans-atlantic ship was lost in 1914 after a collision in the Saint Lawrence River (near the Atlantic). Although resulting in as large a loss of life as the Titanic, she carried few famous passengers and quickly faded from the news with the outbreak of the First World War.

Although the collision happened at night, the two ships could see each others navigation lights. The collision was like two people who meet on a sidewalk and make the same moves to avoid each other.
9. Named after the fort at the entrance of Havana Cuba, this American passenger liner burned with a heavy loss of life under mysterious circumstances in 1934. She later drifted ashore at Asbury Park, New Jersey.

The Captain died mysteriously before the fire broke out, the crew was near mutinous, fire drills were a joke and the fire was probably arson. Because of the Morro Castle and all her woodwork, most passenger ships are now built with fire-resistant materials.
10. The first modern supertanker to be lost ran aground off the Scilly Islands England in 1967 due to the Captain trying to take a short cut. What was her name?

The Royal Air Force somewhat made it worse by bombing the tanker in an attempt to burn off the oil. It didn't work and to make matters worse, almost a quarter of the bombs missed! Today, oil tankers stay far off shore and only venture in to port on strict navigational courses.
Source: Author Marcuspug 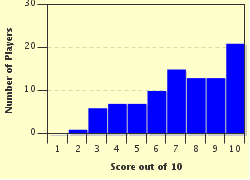 
Other Destinations
Explore Other Quizzes by Marcuspug