A quiz for those who are Heritage Railway fans

Quiz Answer Key and Fun Facts
1. What is the longest Heritage Railway in the United Kingdom?

The West Somerset Railway runs for 20 miles from Bishops Lydeard to the coastal town of Minehead. This railway also has an extention to Taunton for National Rail, which is only used on special events, but sometime in the future it will be offically used by the railway giving it a total of 25 miles.
2. What is the standard top speed limit on a Standard Gauge Heritage Railway in the United Kingdom?

Although it's hard to spot, look out the window on the train and you'll see the speed limit. The one exception is the Great Central Railway, which has a maximum speed of 40 MPH.
3. Most Heritage Railways in the United Kingdom have a direct interchange with, or a National Rail station near by.

While not all of them do, those that are adjacent to National Rail stations are easier to get to if you don't have a car.
4. What do ALL Heritage Railways in the United Kingdom have in common?


Answer: They all rarely operate during the night


Answer: It has a huge number of steam locomotives and rolling stock from abroad

If you don't believe me, go to the Nene Valley Railway website and find out for yourself.
6. Which of these would you never find on ANY Heritage Railway?

I bet loads of kids would love to see him at Day Out With Thomas events.
8. What is the best advice to give to a person who likes Heritage Railways, but doesn't have private transport?


Answer: Go to those that have a direct connection with National Rail, have a National Rail station or one that you can get to by bus

I wouldn't advise you to do any of the others.
9. Which is the odd one out?

The Alford Valley Railway is a Narrow Gauge Heritage Railway in Scotland.
10. Which of these events doesn't exist? 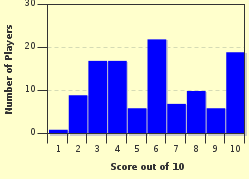 Related Quizzes
1. Laying Down the Tracks Average
2. Subway Systems Tough
3. Trains Around The World Average
4. Steam Locomotives Tough
5. Which Metro System? Average
6. Train Speed Records Difficult
7. I've Been Workin' on the Railroad Average
8. Railways of the World Average
9. From Station to Station - Rails in Berlin Tough
10. Trains With Names Average
11. Let's Do the Locomotives Easier
12. Trains on a Rail Easier


Other Destinations
Explore Other Quizzes by bigt1988