It's in the Title Trivia Quiz

Join me on a tour of some of the world's most beautiful and historic libraries.

Quiz Answer Key and Fun Facts
1. On July 1st, 1731, Benjamin Franklin founded "The Library Company", a modern library for citizens in the American Colonies. With the help of the Junto (a philosophical club), Franklin drew up a document called the "Articles of Agreement" that created the library. In which Pennsylvanian city was Franklin's first modern library founded?

Franklin enlisted the help of William Penn's personal secretary, James Logan, to help choose books for his new Philadelphia library's collection in 1732. Books for the library were sent from London or were donated by members of the library. The vast majority of the books chosen to fill the collection of the Library Company were of an educational and religious nature. Louis Timothee was the Library Company of Philadelphia's very first librarian.
2. The Library of Celsus in Ephesus, Turkey, was one of largest and wealthiest libraries of the ancient world, along with the libraries at Pergamum and Alexandria. It was constructed in 117 A.D. and had the capacity to hold upwards of 10,000 scrolls along its walls. What is unique about this library at Ephesus?


Answer: It is a tomb

The Library of Celsus was created as a tomb for Gaius Julius Celsus Polemaeanus, for whom the library was named. A statue of the goddess of wisdom, Athena, was placed as a marker atop his tomb under the library. The library itself was two stories tall with many windows. The ruins of the Library of Celsus can be seen at Ephesus today.
3. One of New York City's most beautiful libraries is the Morgan Library. The library houses the once-private collection of Pierpont Morgan, and is now part of a larger museum building. In addition to the many books and manuscripts in the library's collection, the Morgan Library holds an original score of a violin sonata in G Major by which famous classical composer?

Beethoven's original score of his "Violin Sonata no. 10, op. 96, in G Major" is one of two main pieces of musical history that can be found in New York's Morgan Library, along with dated letters written in the hand of Mozart himself. The main library room is three floors high, and has two spiral staircases hidden behind movable bookcases.
4. This cathedral's Chained Library dates back to the twelfth century, and was famous for its books, which were chained to the shelves to keep them safe and secure yet still readable. The books were removed from the shelves in the cathedral library when restoration on the cathedral began in 1841. What is the name of the cathedral that was home to the Chained Library?

Hereford Cathedral in England was home to the famous Chained Library. After the restoration of the cathedral in 1841, when the chained books were removed, half of the books were returned to the Cathedral and half were sent to the Victorian Dean Leigh Library. The Chained Library's manuscripts and maps were transferred to a newly-constructed building in 1996.
5. The library at Trinity College in Dublin, Ireland, is famous for "The Long Room", which measures approximately 215 ft in length. The Long Room holds nearly 200,000 books and underwent reconstruction in the 1860s to allow for more vertical space to house books. The Long Room also contains several marble busts, including one by Louis Francois Roubiliac of which famous author of "Gulliver's Travels"?

According to Trinity College Library, the bust of Jonathan Swift is the "finest bust in the collection". The busts line both sides of the main floor of the Long Room and represent famous writers and philosophers. Trinity College Library was given the right to own "a free copy of every book published in Britain and Ireland", similar to the US Library of Congress, which holds a copy of every book printed in the United States.
6. The Vatican Library dates back to the fourth century and, along with the Vatican Secret Archives, makes up the "Scrinium" of the Roman Church. At one time all archival material was stored with the books and manuscripts of the library. In the early 1600s, under the direction of which pope were the archives of the Church entrusted to the Vatican Secret Archives?

The Vatican Library is home to millions of books, manuscripts, and other treasures.
7. St. Petersburg, Russia, is home to the Russian National Library, which has collections of manuscripts, prints, maps, and more. One of the library's prized treasures is a French romance novel that dates back to c.1500 in Paris and tells the tale of one of King Arthur's knights. What is the name of this novel, which was printed on vellum and contains hand-painted pictures?

The National Library of Russia lists two novels on its website as treasures from its Rare Books collection. The first is called the "Book of Hours", and the second is "Lancelot du Lac". In the late fifteenth century, Antoine Verard printed 138 pages of images in the medieval French romance novel "Lancelot du Lac" (Lancelot of the Lake).

The Russian National Library is home to the novel, which is the third volume of the "Lancelot Romance".
8. The Baroque Library Hall is famous for its ceiling frescoes that were painted by the artist Jan Hiebl. The library itself functions as a National Library and is part of a complex called the Klementinum. In which European capital city is the Klementinum located?

The Klementinum was founded in 1232 in Prague near the Vltava River. The complex contains the Baroque Library Hall, Mirror Chapel, and the Astonomical Tower, as well as two churches that form the outer wall. Books in the National Library's collection date back to the 1500s.
9. Wiblingen Monastery Library in Ulm, Germany, is famous for its whimsical design with pinks, blues, white, and gold. The library is located in the north wing of the monastery and is extremely ornamental with multiple statues and frescoes painted by Januarius Zick. In what architectural style was this magnificent library designed?

The Rococo style was often called the "Late Baroque" style and was popular in the 1700s. Renovation of the eleventh century Wiblingen Monastery at Ulm began in 1714, at a time when Rococo was prevalent in architecture. While the original abbey was of an earlier architectural style, the library was designed in the newest style of the times, with the airy and ornate qualities of Rococo that really opened up the space.
10. This Baroque-style library in St. Gallen, Switzerland was designated an UNESCO World Heritage site in 1983. An Irish monk named Gallus built the abbey where the library sits in 612 A.D. The library was added a century later, and in the 1750s both the library and the church were rebuilt in the Baroque style. The library at St. Gallen is said to be one of the most beautiful libraries in the world. What is the name of St. Gallen's UNESCO World Heritage library?

Abbey Library in St. Gallen, Switzerland, is home to some very old books and manuscripts, some of which date back more than 1000 years. The library also contains the oldest book written in German, the "Codex Abrogans". According to the UNESCO World Heritage Center, the monastery (with its Abbey Library) was "one of the most important in Europe" from the 700s A.D. until 1805.
Source: Author kaddarsgirl 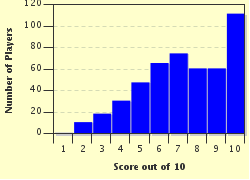 
Other Destinations
Explore Other Quizzes by kaddarsgirl