I've found in traveling that there are really only two important words to know and they are "Please" and "Thank You". I've added a third here that I've found useful, too. Come use them with me on our travels.

Quiz Answer Key and Fun Facts
1. In what Slavic language will you hear our three words "Please", "Thank you" and "Cheers" said as "Molim", Hvala" and "Zivjeli"?

Croatian is a phonetic language. Each letter is a sound unto itself, thus it is not too difficult to pronounce. The problem with speaking it correctly comes from the highly inflected grammatical complexities. "Molim" is pronounced as it is spelled, "MOH-leem". "Hvala" is "HVAH-lah". "Cheers" is "zivjeli" and is pronounced "ZHEE-ve-lee". You can also say "nazdravlje", pronounced "NAZ-dra-vlee".
2. If you were to hear the words "S'il vous plait", "Merci" and "Sante", in what lovely capital city would you be?

French spelling, unlike most of the other Romance languages, is not very phonetic. As in English, the same letter used in two different words can make two different sounds. "S'il vous plait" is pronounced "seel voo PLEH". "Merci" is pronounced "merr-SEE". "Sante" is pronounced "SAHN-tay", or you could say "a la votre", which I believe is pronounced "AH lah vot-re".
3. Where would you be if you heard our three important words said "Kerem", "Koszonom" and "Egeszsegedre"?

Hungarian is a non-Indo European language that is associated, distantly, with Finnish and Estonian. It borrows heavily from the Romance, Germanic and Slavic languages that surround it. In Hungarian,"kerem" is pronounced "CARE-em", "koszonom" is pronounced "KUH-suh-nuhm" and "egeszsegedre" is pronounced "egg-IS-SHE-ged-reh", meaning "to your health". Or, you could say "fenekig", meaning "to the bottom of the glass".
4. If you heard "Bitte", "Danke" and "Prost", in what country would you be?

Latvian is a relatively new Indo-European language, dating to around 1530 AD. It's in the Baltic language family group with Lithuania. "Ludzu" is pronounced "LOO-dzoo". "Paldies" is pronounced "PUHL-dyehs". The drinking toast is pronounced "PREE-eh-ka". You could always say "prosit".
6. In what country, where you could also see the Northern Lights, would you find yourself if you were hearing "Vennligst", "Takk", and "Skal"?

Norwegian is a Germanic language, and close to both Danish and Swedish.
"Vennligst" is pronounced "VEN-leegst", "Takk" is "tawk" and "skal" is pronounced "skawl". Couldn't be easier!
7. In a certain Balkan country you would say "Va rog", "Multumesc" and "Noroc". Which one says our three important words in this manner?

Romanian is a Romance language that is somewhat similar to Italian. "Va rog" is pronounced "vuh ROHG". "Multumesc" is pronunced "mool-tzoo-MESK". Our drinking toast is pronounced "no-ROCK", or you could say "sanatate" (sahn-atate).
8. In this Iberian country our three important words are "Por favor", "Gracias", and "Salud". What country is this?

Spanish is a western Romance language and is the third most used language in the world. It is a very phonetic language. "Por favor" is "POHR fa-BOHR". "Gracias" is "GRAH-syas". "Salud" is pronounced "sah-LOOTH". That's an easy one!
9. In this bi-continental country, the three words we're learning are "Lutfen", "Tesekkur ederim", and "Serefe". Where are we?

Turkish is the most widely spoken Turkic language and its grammar, vocabulary and sentence structure differ greatly from Indo-European languages such as English. "Lutfen" is pronounced "Luet-fen". "Tesekkur ederim" is pronounced "teh-shek-uer eh-der-eem". The phonetic pronounciation of "serefe" is "sher-i-feh".
10. For your last country, our three most important words are "Os gwelwch yn dda", "Diolch yn fawr" and "lechyd da". Where do you think we've ended up? 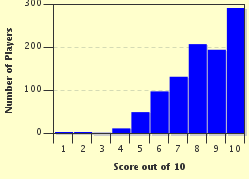