Test yourself! Take this Greetings Around the World Quiz | Languages

Let's see if you know how to say hello and good bye in 10 different languages around the world.

Quiz Answer Key and Fun Facts
1. "Hola!" I will quiz you on greetings around the world. By the way, what language did I just say hello to you in?

That should have been easy. If you wanted to say bye in Spanish, you would say "adiós". Spanish is a language that it is derived from Latin and it is called a Romance language because Latin came from Rome. Spanish is spoken by around 332 million people including people from Spain, Mexico, South America, and Central America. It is the second most widely spoken language in the world.
2. When I went to France, I said this to greet people.

French is also a Romance language. If you wanted to say bye, you would say "Au revoir". French is mainly spoken in Europe, Africa, Southeast Asia, and parts of Canada. 72 million people speak French around the world. It is the 11th biggest language in primary speakers but 1st in secondary speakers.
3. If I put my hands together, put them in front of my face and say "namaste", what country would I probably be in?

This is a traditional greeting for Hindus in India and other places. "Alvida" is the word for saying bye in Hindi. The language of India is Hindi which is very similar to Urdu and Bengali.
4. In what religion would you say "Assalamualaikum" to greet someone?

That greeting is used by Muslims around the world. It is in Arabic which is the language of the Muslim holy book, the Quran. In Arabic, the way to say bye is also "asalamualaikum". It can sometimes be shortened to salaam. Arabic is mainly spoken in the Middle East and North Africa by about 180 million people also.
5. How would you say "hello" in the native language spoken by the most people in the world?

With 1.1 billion speakers, Mandarin Chinese is the most commonly spoken language. It is mostly spoken in China and some of Eastern Asia. If you wanted to say bye, you would say "zai-jian". China is also the largest country in population which is why it has so many speakers.
6. Now we will see how to say good bye in different languages. In which language would you say "sayonara" as bye?

Japanese is mostly spoken in Japan. If you wanted to say hello, you would say "konichiwa". It is spoken by around 130 million people around the world. Japanese is related to Chinese. Japanese writing is vertical instead of horizontal.
7. How would you say goodbye in Russia?

Russian is mostly spoken in Russia by 145 million people around the world. Hello in Russian is "Zdravstvuite". Russia is the country with the largest area in the world. It is related to many other languages like Bulgarian and Polish.
8. Let's try an African language now: Afrikaans, do you know how to say goodbye in that language?

That was false. The actual word for good bye is "hej dĺ". Hej is the word for hello in Swedish. Around 10 million people speak Swedish in Sweden and parts of Finland. It is a Germanic language and is related to Norwegian and Danish.
10. In which ancient language would you say "vale" to somebody as a way to say goodbye?

Latin is a language that very few people speak now but it was the language of the Roman Empire. Hello would be "salve" in Latin. Although Latin isn't spoken any more, the languages the come from it, flourish. These are the Romance languages which are Spanish, French, Portuguese, Italian, and Romanian.
Source: Author shazy95 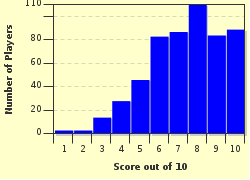 Related Quizzes
1. Language of the Day! Average
2. Say Cheese! Easier
3. How Do You Say ...? Easier
4. Please! Thank You! Cheers! Average
5. Say Goodbye Average
6. World Greetings Easier
7. Thank You Around the World Tough
8. What Language is That? Tough
9. Merry Christmas Everybody! Easier
10. Foreign Phrases: Around The World Average
11. Thank You! Easier
12. Foreign Greeting And Parting Words 2 Average


Other Destinations
Explore Other Quizzes by shazy95