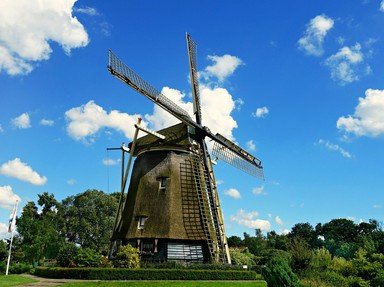 What Do the Dutch Say? Trivia Quiz

The Dutch have some interesting words to describe things. I give you a Dutch word or words and a literal translation that make up that word or words. Can you guess its meaning?

Quiz Answer Key and Fun Facts
1. "Spijker" means "nail" and "broek" means "pants", but what is a "spijkerbroek"?

When the denim pants he sold kept on tearing, Jacob Davis came upon the idea to use copper rivets to reinforce them. It is from these rivets that the name "spijkerbroek" comes, literally meaning "pants with nails". In Dutch the singular "broek" is used for "pants". The plural form is "broeken".
2. "Boter" means "butter" and "ham" is the same as in English. So what are you eating when you are eating a "boterham"?

When you make a sandwich you will spread it with "boter" and you may put some "ham" on it. In old Dutch, "ham" also referred to a "lump" or "chunk". The word "boterham" is used both for a slice of bread and for a sandwich. Several slices or sandwiches will be "boterhammen".
3. What do you do with "gestampte muisjes"? "Gestampte" means "pounded" and "muisjes" means "little mice".


Answer: Put them on bread

"Gestampte muisjes" is made from ground aniseed and sugar. Originally they were whole sugar coated aniseeds but because it was difficult for the elderly to eat, the manufacturer decided to offer a ground variation. The name "muisjes" comes from the original sugar coated aniseeds, which looked like little mice with the "tail" of the aniseed still sticking out.
4. A "krent" literally is a currant, but it can also be used for people. What kind of person would you call a "krent"?


Answer: A cheap or tight person

The term comes from the days that currants were used as a means of payment and therefore very valuable. Ebenezer Scrooge from Charles Dickens' "A Christmas Carol" will most certainly be called a "krent". The plural of "krent" is "krenten".
5. Your "nicht" is your niece (or cousin). What type of person is also called a "nicht"?

"Chocoladepasta" is a chocolate spread to put on your bread, made of cocoa powder, sugar and fats (vegetable oil). It is also called "pasta", for short. "Pasta" is the Dutch for "paste" as well as for "pasta" as in "Italian pasta".
7. What does one do when you go "vreemd", where "vreemd" means "strange" or "unknown"?


Answer: Have an affair

"Vreemdgaan" literally means "to go strange". About the most important thing when one has an affair is that it remains unknown, especially to your partner.
8. A "koe" is a "cow" and a "voet" is a "foot", so what is a "koevoet"?

It is named a "koevoet" because one end of a crowbar is shaped like a cow's foot. It is also called a "breekijzer" in Dutch, an "iron" to "break" something with.
9. "Hagel" means "hail" and "slag" means "blow" or "stroke". What is "hagelslag"?

"Hagelslag" is the chocolate sprinkles that the Dutch like to put on their bread. Yes, the Dutch tend to put things on their bread that may be a little strange to others. The name comes from when you pour "hagelslag" from the box onto your bread, it looks like hail striking down.
10. "Muggen" are mosquitoes or gnats, and a "zifter" is "a person who strains". But what kind of person would you call a "muggenzifter"?


Answer: A person who splits hairs

A "muggenzifter" is a narrow minded person who tends to find fault with everything. The expression comes from the Bible, namely Matthew 23:24 - "Gij blinde wegwijzers, die de mug uitzift, maar de kameel doorzwelgt." (NBG51) or in English: "Ye blind guides, which strain at a gnat, and swallow a camel." (KJV)
Source: Author Shaffyre 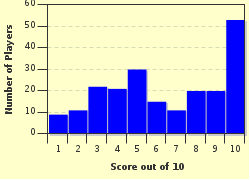 
Other Destinations
Explore Other Quizzes by Shaffyre