Can You Win the Triwizard Tournament? Quiz

Take this quiz to see if you are an eligible candidate to enter and win the Triwizard Cup! (Questions based on "Harry Potter and the Goblet of Fire" by J.K. Rowling)

Quiz Answer Key and Fun Facts
1. Arriving at Hogwarts this year, you learn that two schools, Beauxbatons and Durmstrang, will be coming to take place in an exciting event, The Triwizard Tournament! You are very excited to enter, until you hear that you must be 17 and older to participate. How do you enter in the Triwizard Tournament?


Answer: Put your name in the Goblet of Fire

The Goblet of Fire is where you submit your name and school to be selected. It chooses one champion from each school to be in the tournament.
2. On Halloween, the champions are announced. They are Fleur Delacour from Beauxbatons, Viktor Krum from Durmstrang, and Cedric Diggory from Hogwarts. Everyone is cheering on the champions when the Goblet of Fire starts to fire up again. Another name is called out, and you hear that it is yours! Reluctantly, you walk up to Dumbledore and go to meet the other champions. What does Fleur say to you when you walk in?

Fleur thinks Harry comes to deliver them a message. He doesn't answer her because Ludo Bagman, Dumbledore, Karkaroff, Madame Maxime, Mr. Crouch, Professor McGonnagall, and Professor Snape come in.
3. When the wand weighing ceremony takes place, Ollivander arrives to see if the wands are in working condition. He checks Fleur's wand, then Cedric's, and then Krum's. He spends several more minutes on your wand than on any of the other champions. What does Ollivander first say when seeing your wand?

Ollivander remembers your wand because the phoenix feather in it matches the phoenix feather in Lord Voldemort's wand. After a while, Ollivander makes a stream of wine shoot out of your wand and hands it back to you.
4. You try to figure out what the first task will be, when Hagrid invites you to come into the forest with him at midnight. You see dragons being constricted by several men. Which dragon is the most vicious?

The Hungarian Horntail is the deadliest dragon out of the four. The other dragons are a Common Welsh Green; a Swedish Short-Snout; and a Chinese Fireball.
5. You get past the Horntail in the first task by flying on your Firebolt. Anxiously waiting for your score, you find out the marks are being given out of ten. What score does Madame Maxime give you?

Madame Maxime gives you an eight; Ron thinks she took off points because the dragon cut your shoulder. Crouch gave you a nine, Dumbledore a nine, Bagman a ten, and Karkaroff a four.
6. In between the first and second tasks, the Yule Ball takes place. At dinner, how do you order your food?


Answer: Tell your plate what you want

Everyone is confused as to how you order until Dumbledore says "Pork Chops!" to his plate loudly and clearly.
7. To figure out a clue for the second task, you have to open your egg from the first task. What is the last line of the song the egg sings?

"Come seek us where our voices sound,
We cannot sing above the ground,
And while your searching, ponder this:
We've taken what you'll sorely miss,
An hour long you'll have to look,
And to recover what we took,
But past an hour--the prospect's black,
Too late, it's gone, it won't come back."
8. In the second task, what does Fleur get attacked by so that she can't save her hostage?

Grindylows are green underwater creatures that can be vicious. They are in the lake and are obstacles for the champions to pass.
9. After facing a boggart, you come across a strange golden mist floating in front of you. You know that Harry Potter tried this spell to blast it out of the way - what was it?

You try "Reducto" on the mist, but it doesn't work because the Reductor Curse is for solid objects only. Next you just walk through it, and the whole world is upside down. You eventually get out by pulling your right foot away from the grass ceiling.
10. Next you look for Fleur, because you're sure you heard her screaming. You don't find her, but you do come across a Blast-Ended Skrewt. How do you get past it?


Answer: Try to stun it

You try stunning the magical creature, but it reflects off the shell. Next you hit it under its shell where it is softer. This works, and you get past the Blast-Ended Skrewt.
11. You find a new path and begin running down it when you hear yells from Cedric and Krum. It seems as if Krum is torturing Cedric. Finally, you see Cedric on the ground and Krum standing over him. What curse did Krum use on Cedric?

The Cruciatus Curse was used on Cedric, and you Stun Krum to stop him from hurting Cedric. You then ask him if he's alright, and discuss Krum's behavior.
12. What must you now do to ensure that Krum will be rescued by a teacher, rather than eaten by a Blast-Ended Screwt?

After sending up red sparks into the air above Krum, you and Cedric continue walking.
13. After you and Cedric have separated, you come across a peculiar magical creature. She recites a poem to you that you must figure out, to cross her. What creature is this?

A Sphinx is a creature that looks somewhat like a lion with a human head. She is mostly used to guard places, because she is hard to pass with her tricky riddles.
14. What was the answer to the creature's riddle that you had to figure out?

The correct answer was "Spider" which got you past the sphinx. Little did you know that you would actually be meeting a spider along the path to the Triwizard Cup.
15. After you reach the cup, Cedric is there with you and you fight over who should go to the cup first. When you both touch it at the same time, where are you taken?

You and Cedric are taken to the graveyard where Voldemort's dad was buried. Cedric dies and Voldemort comes back to life. After battling Voldemort, you return to Hogwarts with Cedric's body.
Source: Author Sportzchick17 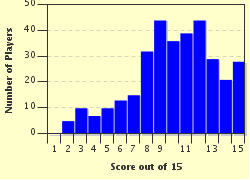 
Other Destinations
Explore Other Quizzes by Sportzchick17